Bus Rapid Transit System (BRTS) incorporates most of the high-quality aspects of metro systems without high investments. BRT was developed as a viable transit option in Latin America, where urban planners were seeking cost effective solution for the urban transport dilemma. This highly effective and economical mass transit option is now a way of life in many developing as well as developed countries such as China, Taiwan, Brazil, Columbia, Ecuador, Japan, United States of America, Australia, New Zealand, England, France and so on.

Commissioner Mohammad Mohsin of the Bangalore Metropolitan Land Transport Authority (BMLTA) is placing this note on the proposed BRT for Bangalore for public discussion. BRT is seen as a cost effective method to deploy high quality rapid transit in cities.

Please comment below the article. The commissioner also plans to organise a public discussion following this. The policy will then go through approvals at the BMLTA itself and then the state cabinet, according to the commissioner.

BRT is an integrated system of facilities, equipment, services and amenities that improves the speed, reliability and identity of bus transit. BRTS is globally recognised as one of the most cost effective solution for providing high quality public transport service in urban areas. The BRT is operational in the world’s major cities like Mexico City, Sao Paulo, Bogotá, Santiago and also Beijing, Taipei and Hanoi, where it has proved a hit with the masses. 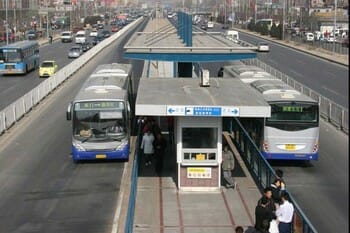 • Most flexible rapid transit mode for cost-effectively serving the broad variety of urban and suburban environments and markets.
• It suits to all section of society by its classy service.
• Reduction in road accidents as Latin American experience suggests that 50 per cent to 80 per cent accidents came down.
• Can operate on arterial streets, in freeway medians, on freeway shoulders and alongside freeways.
• Can accommodate express and local services on a single facility.
• Can be less costly to implement than a rail transit line while providing similar benefits.
• Can be effectively integrated into surrounding environment and can generate significant urban development benefits.
• It has got self financing abilities because of good revenue model.
• It is energy efficient (20 per cent to 30 per cent fuel saving) and environment friendly as it reduces congestion in the area.
• It can speed up the city traffic as dedicated lane operations double up the speed.
• Have little additional implementation cost over local bus service where it runs on streets and highways.
• BRT can handle passenger flows in the range of about 8,000 to 20,000 passengers per hour per direction – depending upon the lanes (number, type) dedicated to bus system.
• In Bogota (Columbia), with provision of two bus lanes throughout for each direction, exclusive ROW, restriction on crossing traffic, state of art station design with automated gates and extensive usage of IT systems in passenger information, ticketing and operation of buses – up to 42,000 PHPDT capacity has been reported.
• The segregation of non-motorised modes will reduce the friction between slow and fast moving vehicles and improve the efficiency as well as safety of all road users.
• Separate pedestrian paths duly segregated with the help of guard rails and disabled friendly ramps will encourage pedestrians to walk on footpath.
• The overall objective of the planning of BRT System is to ensure that commuters are discouraged to use personalised modes and shift to public transport with a better bus transport system being made available along the corridor.

• Impacts due to project location, construction works and project operation.
• Loss of trees.
• Land acquisition.
• Priority signalisation for BRT cannot be given at junctions.

Design of a BRT station:

Integration of a BRT system in an urban setting presents within itself a challenge and an opportunity to improve and enrich the existing streetscapes. Design such as a shelter is to support an appealing, cohesive visual identity for a quality and safe transit service. Some of the important design features are:

If BRT station is at the junction then many buses cannot utilise green signal since the earlier bus blocks the bus bay because it is waiting at the red signal. This results in long queues and bunching of buses and slows down the BRT system. This may result in unwanted pedestrian behavior as a result of wanting to reach bus stop.

Advatages of having central bus lanes:

• Exclusivity of bus operation.
• No side friction with service road cuts/ property access points/ side roads.
• Provides flexibility for adoption of closed system.
• Better suited for priority signaling.
• Separate left turning motor vehicle lane possible at junctions.
• Permits use of additional width on left side for on-street parking, IPT stands, emergency stoppage areas.
• Uses same road width/ area as for exclusive side bus lane, thereby not requiring any additional tree-cutting or modification/ shifting of medians.
• Allows flexible use of opposite bus lane for emergency movement of buses, without disturbing other traffic lanes.

Disadvanges of having central bus lanes:

• Induces weaving between bus lanes and motor vehicle lanes at either ends of flyovers.

• One of the main reasons for the failure of the Delhi BRT was that it did not take the people along with it.
• A very limited route of BRT or we can say sample size is too small.
• Other buses also ply on the BRT stretch, creating confusion for passengers regarding bus routes and resulting in chaos at the stations.
• No designated bus lanes were provided (physical barriers).

With the launch of BRTS at Ahmadabad, the city now gets around 25 BRTS buses plying on a 12.5 kilometer stretch from RTO to Chandra Nagar of the total 55 kilometer of phase one. This is the first such full fledged BRTS project in the country because similar projects in Delhi and Pune do not carry systems like control room, IT infrastructure, dedicated buses and so on. The Delhi BRT, rather, is primarily a road infrastructure project or high-capacity bus service in which all types of buses run in a lane designed for the BRTS.

BRT system on ORR – Bangalore: from Hebbal to Silk Board junction

The Comprehensive Transport and Traffic Plan for Bangalore suggests that BRT can be done for 291.5 kilometer at a cost of 3498 crores in two phases in 14 corridors. The proposal is to develop BRT system on the ORR as a pilot project.The bus system would have a dedicated corridor and operate new technology buses designed for urban environment. Some of the salient features of the proposed BRT include:

Bangalore needs such system to reduce the congestion and speed up the traffic as BRT with use of ITS give a leading edge as the transporter is always in control and passenger will be in focus in real time.

Traffic control, traffic information and fleet management can be very easy for the benefit of transport company and as well as public. It is a win – win situation for the public as well the authorities. ⊕

About Mohammad Mohsin 2 Articles
The author has not yet added any personal or biographical info to her or his author profile.
Website

“Bangalore has the perfect weather for sports training”

So says Bangalorean and former swimmer-Olympian Hakimuddin Habibulla. His foundation supports and nurtures major young sports talent from around the country. A Citizen Matters exclusive.

A different type of summer job

This summer job contributes about five thousand rupees towards their school fees. The regulars at the park encourage these children by buying vegetables from them instead of going to supermarkets.