Ever thought of a Bangalore without Cubbon Park and Lalbagh? What if M.G.Road disappeared one day? Or what if you woke up to headlines that read you would never be able to see another Gulmohur or Asoka tree in the city again? Thankfully, none of the above seem to be happening yet. However, going by recent developments, there is a strong chance that the Hebbal Lake will soon become a thing of the past. For in a few months from now a swank, new ‘floating restaurant’ may sit in its place.

If you’ve been past the lake recently, you may have seen that it is now completely dry. This is because it has been delibrately drained out to make way for a ‘unique’ tourist attraction. 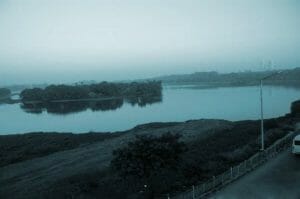 View of the Hebbal lake from the flyover (pic: Rushalini Rajkumar)

Hebbal Lake is proposed to become the site for the East India Hotels (parent company of the Oberoi group of hotels) to establish an upmarket recreational facility, consisting of food courts, gift stores, a children’s area and various other entertainment facilities to be developed at the price of Rs. 16 crore . It is to be fenced on all sides and a Rs. 20 entrance fee is to be charged as well.

The 150-acre space is one of the largest man-made water bodies in the city, created in the 16th century to meet the ever-increasing water needs. Over the years it has grown to be a source of beauty, a natural cooling mechanism keeping rising temperatures and pollution levels under check, and providing much-needed water. It has also become the source of livelihood for almost three hundred families*. These include fishermen, washermen, livestock owners and farmers who depend on it for most of their basic needs. The Hebbal Lake supports its own ecological system by means of the several species of water birds that call it home. It is our very own bird sanctuary where many a wildlife enthusiast come to bird watch instead of having to travel to destinations outside the city to do the same.

The recreational facility large-scale commercial project threatens to end all this and environmentalists are not pleased. It was in view of this matter that 250 plus concerned citizens observed a candle light vigil on the night of 4th August, 2007, at the Hebbal Lake. Braving the chilly monsoon breeze, they turned up with placards and candles to show their opposition converting the water space into a concrete one. Children as well as adults joined together to discuss and make each other aware of all the facts and present suggestions on how to appeal to the concerned authorities and prevent what they considered an unlawful encroachment of public property and deliberate exclusion of sections of people from an area that is meant to be enjoyed by all.

Notice Board at the entrance to the park around Hebbal Lake (pic: Rushalini Rajkumar)

The worry is that twenty-five more lakes in Bangalore are slated to join similar ranks with the Lake Development Authority leasing them out to private parties for the purpose of ‘restoration and maintenance’. It also goes against the ideal with which the body was set up in 2002, which was to maintain lakes through ‘community participation’. Various legal issues surround the Hebbal Lake venture such as violation of land use and zonal restrictions. Suggestions to file a public interest litigation and move the courts have been mentioned by a Bangalore lawyer who attended the vigil.

The authorities claim that transforming Hebbal lake will provide a place for urbanites to relax while keeping the area free of slums. However, citizens argue that fencing off public property and charging an entrance fee virtually robs people of their right to freely access such a space.

Approximately a week from now, another public demonstration opposing the move is to be held, this time at the Gandhi statue on M.G. Road. The idea is to, this time, draw in even more people than those that attended the candle light vigil. There is strength in numbers. If enough noise is made about the issue, chances are that the people concerned may be forced to withdraw their project from the Hebbal Lake, thereby saving it and allowing it to exist in its natural form. Ultimately, as responsible Bangaloreans, it is our duty to know all sides of the matter so as to make an informed decision which is beneficial to all.

About Ayesha Aleem 3 Articles
The author has not yet added any personal or biographical info to her or his author profile.

BMTC’s fare hike has prompted him to walk two kilometers, rather than paying 9 rupees, says Siddharth, a student who travels regularly in BMTC.

Chief Minister B S Yediyurappa has backtracked on his decision to ban firecrackers this Deepavali. But we can still push the administration to ensure that only green crackers are burnt in Bengaluru, that too during the specified timings.