The air was abuzz with excitement and anticipation at Jaaga Creative Common Ground on January 6th evening. The occasion was Lakeview Award for Everyday Achievement (LAEA) held for the first time to recognise the efforts of selfless citizens residing in Shanthinagar, Langford Road, and Richmond Town "for micro-level achievements in making individuals or community life better". 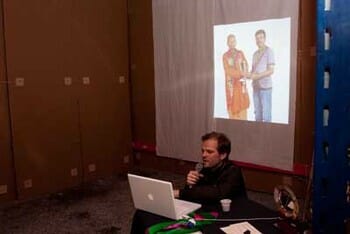 The event was a brainchild of German artist Mathias Einhoff, co-director of Skulpturenpark Berlin_Zentrum and former lecturer at the Universität der Künste in Berlin. He was in the city on a Goethe-sponsored six-week artist residency at Jaaga. The latter is a unique, eco-friendly structure in the heart of Shanthinagar created by artist Archana Prasad and technologist Freeman Murray for people inclined to bring about social change to gather and share their vision. Archana said, "we offer the space for free for projects aligned with our vision."

The genesis
Einhoff, who has worked with local communities previously in Pakistan and Germany, says he came with "no assumptions or stereotypes but with an open mind and intention to experience the city firsthand". Two weeks into his stay, he noticed that Jaaga was splitting Shanthinagar into low-income and middle-class areas. "I often meet people who have won awards for their work, sports, business, etc. I also came across a store which had numerous trophies. The mixed zone and ‘award culture’ sparked the idea of LAEA to recognise the kind of acts that are outstanding and yet go unrewarded."

Getting started
With this idea in mind, Einhoff named the award "Lakeview" as the Hockey Stadium opposite Jaaga was a lake/tank a long time ago. He invited the community members to nominate any person/s who had made a positive difference. He set out to meet the neighbourhood folks – a tough task as he did not know the local language and security guards at many apartments didn’t allow him to enter. With help from Archana, Kiran D and others from Jaaga, artist Suresh Jayaram, Santosh from Janaagraha, the process took off in no time. Buoyed by the response, Einhoff and his team awaited the grand finale with 32 nominations on hand.

Micro effort, macro effect
The stage was set. Over 100 people from various income and age groups converged on the venue. As the award ceremony unfolded, what was striking about the nominations was the recognition people got for not only what they did, but how they did it.

Among the first to arrive was Jyothi Surendran, member of the Shanthinagar Resident’s Development Association (SHRED) who nominated Anwar and his family for solid waste management and recycling work. A visibly excited Anwar and Manjula said, "we have been doing this work for 10 years but this is the first time that we are receiving an award."

There were quite a few nominations by St Michael’s Church and one of them was for V Vardhraj, a gardener. Businessman Suresh Jain nominated Sri Sri Sri Thimmaiah Bharathi Swami for devoting his time and money for an orphanage. Bindu Ashok nominated Vijay, a therapist who teaches yoga. "Such events help us come closer. And recognition of this nature will help people do better," Bindu said.

Dinesh and Munni were appreciated for keeping the food store chain, Food World, clean and tidy. Vrinda had nominated Narasimharaju, a traffic policeman for doing his duty in a courteous and friendly manner. Payal Saxena and Supriya Deshmukh in their 20s had nominated security guard Krishna of their building for similar reasons. They felt one such isolated event "might not bring about a huge change but it was still a step in the right direction".

As the ceremony drew to a close, SHRED President Colonel D’Sa hoped that "people’s eyes will open to what is before them and they continue to help others".

The following day, Einhoff talked about projects in Germany where he brought together isolated clubs and associations at a market place in Hamburg to establish a sense of community. While in Pakistan, along with a collective, he headed into the old city of Karachi but was warned against venturing as it was dangerous. To break the myth, the artists set up an art space right in the middle of the city.

Will the show go on?
When asked if LAEA was here to stay, Einhoff replied, "this was a one-off event. Getting the idea out is the artist’s job. Whether people pick it up or not is up to them." ⊕

About Anuradha Prasad 5 Articles
The author has not yet added any personal or biographical info to her or his author profile.

For those with a penchant for museums, Bangalore has a collection of them. Admire the surreal paintings of yesteryear Bangalore or learn the principles of electronics or astronomy. Read on. 1. Government Museum and Venkatappa

At ICAS 2019, scientists and policymakers from across the country will deliberate on strategies to reduce air pollution. You can attend panel discussions and trainings at the event