Bangalore in the fifties was a relaxed, laid back town with little aspiration to cosmopolitanism. There was a rarely articulated divide, between the westernized cantonment area and the city areas with their predominantly old Mysorean culture. Double road (K H Road) was the dividing line as is still suggested by the crematorium on its eastern side.

The cultural divide was quite stark, Veena and Carnatic music, long skirts and long hair, kho kho and tenniquoit in the schools on the south side and piano and western classical music, basket ball and hockey, knee length skirts and god forbid, shorts! on the north side schools. North was north and south was south and hardly did the twain meet. 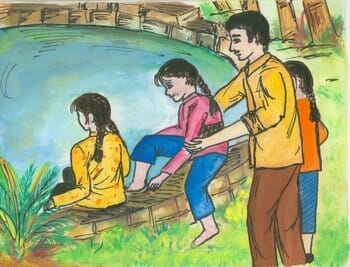 In this milieu, my father, an advocate of gender equality before his time, decided that the girls in the family that included his daughters and nieces should learn a few life skills that were not usually in the feminine domain of south Bangalore. The first of these was to learn to swim. Our coach, one of my father’s friends, was generally held to be the national swimming champion of the forties and was well known in the Basavanagudi area as ‘the’ swimming teacher.

Now, as far as we knew, the only swimming pool in Bangalore was in the Corporation office premises in Corporation Circle, but this was ruled out as being poorly maintained and unhygienic. So a circular well, sixty feet in diameter and forty feet deep in Doresanipalya off Bannerghatta road was designated as the swimming pool for all the acolytes of our coach.

To suit the times, the swimming costume had to be modest enough while still allowing us to thrash about in water. My mother cut them out of plain cotton cloth, with high necklines, long sleeves and leggings up to the knee and tailored them at home. Much to my grandmother’s outrage, equipped with these dresses, discarded tubes from my father’s cars and a long thick rope, we were all set for the adventure of learning to swim.

As our coach also served time as an engineer at HAL, we had to leave home in Basavanagudi at 5 am to train. In total darkness and the bone cutting chill of Bangalore of those days, we bumpily drove in a Fiat Millicento to our ‘swimming well’ via Bangalore dairy circle. (The bumpy ride is one thing that has not changed in Bangalore till today!) Bannerghatta road beyond that was just a track with paddy fields and guava gardens on either side. The Sivabalayogi Ashram used to be one lone building somewhere on our route.

Most of my memories of learning to swim are of being thrown into the well from a height of about twenty feet, with an inflated car tube around my waist. The other third degree method was to tie a thick rope around the waist and being ordered to jump into the water and splutter. Our coach pulled us out just as we thought we had drowned. As we advanced with out swimming lessons, we had to swim across the diameter of the well without any of these aids.

The well also served to irrigate the surrounding farm land, and a pair of oxen would be working alongside us to draw water. Soon enough, to our woe, a modern electric pump was installed, and on the days that it was used, it sucked out water so fast that little water snakes and crabs would emerge from the crevices of the exposed wall and snap at our fingers when we tried to grab the wall to rest. Thus we learnt to swim, to breast stroke, to back stroke and to do the free style (referred to then as ‘over arm’ stroke).

Picture of Munivenkatappa and his students (from right end: Prabha(author’s sister), Kusum(author’s cousin) and another friend. (pic: from an old Kannada encyclopedia, courtesy Usha Srinath)

Well, soon there came a day, when the coach decided that all his six female pupils, would take part in a state level swimming competition in the corporation office pool! What a spectacle that was, the first time, as far as I know, that women were competing in this sport in Bangalore. Because there were no other competitors, all six of us ranging in age from six to sixteen had to compete against each other.

Naturally, my eldest sister, the tallest and best swimmer of us all, won all the races and the championship. She later even had the distinction of having her picture appear in a Karnataka encyclopedia as a state swimming champion.

Thanks to our enduring swimming lessons then, now in my fifties, I swam in the sea for the first time at Kovalam couple of years back. Last week, on a visit to Devbagh beach at Karwar, the clean beach and the warm sea was so inviting that I could not resist going for a long swim.

To my surprise, even in twenty first century India, this middle aged woman was the only one swimming out in the sea while all the young couples, mostly from Bangalore, stayed safely on the beach. That was Bangalore then, as it continues to be now, a mixture of modernity and conservatism! ⊕

About Usha Srinath 6 Articles
The author has not yet added any personal or biographical info to her or his author profile.

Monsoon – busy days ahead for mothers

Behind the picture-perfect, cool monsoon face, lurks a not-so-pleasant reality that only mothers of young children are acutely aware of.

It all began when a small group of 60 plus men sat one evening and discussed the disconnect of the walkers – young and old.

Open Letter to CM on COVID management in Bengaluru