A few of us from the cycling community (specifically, from the Rideacycle Foundation, and from the Bangalore Bikers’ Club), were able to meet Dr Venkatraman Ramakrishnan,  who won the Nobel Prize in Chemistry in 2009, the apex to a career of achievements and awards, at the campus of the Indian Institute of Science on January 6th. 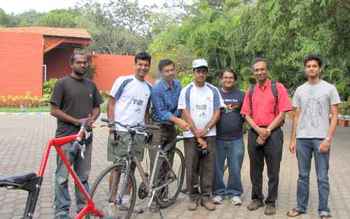 For me, it was a refreshing change to talk to a famous personality not about his work, but about something else that he is very keen on. He gave quick and spontaneous answers to our questions. Given the number of interviews he must have been giving post his Nobel prize, it was truly amazing to find such from-the-gut reactions, not studied ones!

Some excerpts from the session with Dr Venki (as he is known):

Murali H R: I am not a scientist, sir, and don’t want to discuss your work here….We were first intrigued by the fact that you don’t own a car. We are always curious to know the psychology of those who prefer cycling. In India, cycling is perceived as a mode of transport only for the poor. So, what is it that makes you prefer a cycle?

Dr Venki: I cycle for a variety of reasons…the first being that I enjoy cycling. It’s a much nicer mode of transport, it doesn’t pollute! Also, though I do run and lift weights, but I know that even if I don’t get any other exercise, I have had it in the form of cycling each day. By the time you get to work, you are wide awake, alert, and ready to start work..and at the end of the day, it works in reverse. It lessens the stress and relaxes you….and I think that makes for a great lifestyle. In Baroda, as a child, one could cycle everywhere…now I find that the student hostels, which were full of parked cycles, are full of motorcycles instead. I think motorized transport is destroying Indian cities.

Murali: One of the reasons cited against taking up cycling is that "it’s slow and consumes time." You have such a busy schedule..how do you manage to get everywhere on a cycle?

Dr Venki: That reason…is bogus! The very same people who don’t want to cycle, do get the time for whatever other activities they really want to do. In Cambridge, too, we have a traffic problem…and when I go out to dinner with my friends, I am usually there before the other dinner guests at the restaurants! Up to 5 km or so…it’s actually faster by cycle.

Murali: What are the facilities that you find in Europe?

Dr Venki: Well, in England, we are actually behind Holland, where they have separate bike paths, right next to the road.. your cycle is not in the traffic. Especially when you want to take young children cycling, this feels very safe. In fact, there are some paths through scenic woods which are only for pedestrians and cyclists, not for motorized traffic. The main thing I have to say… is that all these things cost very little, compared to roads and under/ or overpasses.

It would be good to see a resurgence of cycling in India…we were a nation of cyclists, and seem to have lost that. It’s a silly way to "progress"… and the traffic causes so much of stress!

However, cycling cannot co-exist with the kind of traffic I see in Bangalore. Here, people with influence and wealth seem to think of cycling only as a poor man’s transport. I think that youngsters should keep up cycling and put pressure on the administration to provide better facilities.

For example, I belong to a cycling club in Cambridge; the members attend all the planning council meetings, and ensure that the cyclists’ concerns are taken care of. It’s a constant process, to keep monitoring how roads are being built.

Murali: You went to Norfolk for a cycling tour…what were your experiences?

Dr Venki: Oh, how did you find out about that! My wife (Vera Rosenberry, an author and illustrator of children’s books) and I  went on a cycling tour. We had a very good time. We saw beaches, old castles and villages… at the end of the tour, my generally high blood pressure was below normal!

Murali: What do you think is the infrastructure for cycle tourism (in our villages)?

Dr Venki: Actually, a biologist friend of mine (Dr Graeme Mitchison) and I were planning a cycling holiday in India…he’s already done a couple of tours in Maharashtra and Kerala. But my winning the Nobel Prize turned everything topsy-turvy for a while! I was trying to convince him that since I know three Indian languages, I could be a great cycling tour companion!

Most of us in England like natural beauty and wildlife. We are not interested in seeing huge, crowded monuments. In India…how does one start a cycling tour? Getting out from the airports itself is so tough! Perhaps bike lanes could begin from major airports, and fan out on to the quieter roads…and the administration could provide better facilities for cyclists. Perhaps cycle rentals could be organized, too.

Murali: In Bangalore, and in India, children are completely neglected and forgotten when it comes to road spaces. Your comment?

Dr Venki: If the government could have cycle paths near, or even instead of, roads…and allow children to ride to their playgrounds and schools (it would be good)….the parents who are interested in their children’s cycling, should bring pressure on the government.

Deepa: I find such a difference between cycling down a tree-shaded road, and a broad highway in the blazing sun, with no shade. How do you feel about it?

Dr Venki: Let’s return to the trees! Earlier, every road, even the highway, had large shade-giving trees; but that’s a more general problem, not just for cyclists.

Arun: How does one manage cycling in the heat of the tropics?

Dr Venki: No problem at all! Baroda (Vadodara), where I grew up, had summers where the temperature used to go regularly to 45′ Celsius! And we cycled around in the afternoon. We did have alternatives like the bus and the rickshaw, but we cycled because we liked to.

Pradeep: In India, 18 is the legal age to ride motorized vehicles, but in the past few years, the rules seem to be flouted by so many youngsters on their motorized two-wheelers. Your comment?

Dr Venki: Adult role models are very important for children. A child who grows up watching his/her parents cycling, will want to emulate them; if they see only aspirations towards motorized transport, that’s what they will also aspire to.

Deepa: How do you get all your shopping done on the cycle?

Read about Venkatraman Ramakrishnan here. For a 30 second video of the interview, click here

Dr Venki: We have panniers fitting on either side of the cycle, where we can store our shopping. Actually, going cycling to the shops is very good for you financially…with a car, one would buy up lots of stuff and fill the car with it. With the cycle, one is forced to buy just what one needs, it limits your shopping!

Murali: One final question. It was said that Einstein developed the Theory of Relativity while cycling…what about you?

Dr Venki: I’d say that cycling does relax the mind, and allows one to think about various problems and their solutions.

The time with Dr Venki was over, and we bade adieu to one scientist, who’s green where transport is concerned. ⊕

Stay sharp. Get a receipt for anything you procure at the petrol bunks. Keep an eye on the actual amount of petrol/diesel you are getting. Check the bill thoroughly.

With no clarity on the safety of cell phone transmitters, consumer groups are concerned about their increasing number in Bengaluru and whether rules are followed in their installation.