It has been an eventful year. From pedestrian policies to Lok Sabha elections, from storm water drains to BMTC buses, Bengaluru witnessed a slew of changes. Be it infrastructure, environment or civic affairs, a lot has been said and a little less done. But what probably stood ground through the entire year were the voices of the people living in the city, bearing the brunt of it all. Whether it was the Pink Chaddi campaign or yaara Metro, the Yelahanka-Bellary link road or the BBMP’s road-widening plans, citizens spoke up for the city. 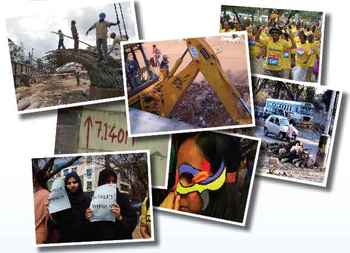 The year started on a not-so-good note with a series of attacks against women in the city, in the aftermath of an attack in a Mangalore pub. This sparked off peaceful protests across the city during February, including the Pink Chaddi and Bengaluru Unites campaigns. The Nirbhaya Karnataka Collective was formed to reclaim public spaces and promote safety for all.

One major step by the government took, mostly noted by citizens in passing, was the Bangalore Water Supply and Sewerage (Amendment) Bill 2009, which made Rainwater harvesting compulsary in city buildings.

BBMP went through some emergency situations. On May 31st, a six-year-old boy named Abhishek was washed away in a drain near his house in Lingarajapuram. His body was never found despite search operations for more than ten days. BBMP Commissioner S Subramanya faced flak for BBMP’s inaction and was transfered to the Agriculture Department. Three days later, Bharat Lal Meena, Social Welfare Department Secretary, took over.

But BBMP did not wake up to the dangers posed by open drains. 18-month-old Vijay fell victim to another drain in September.

The first infrastructure project questioned by the public was the Bangalore Metro. In February, the High Court dismissed 11 cases against land acquisition, filed by individuals owning properties on CMH Road. People protested against felling of trees in Lalbagh and on Nanda Road. In November, it was reported that at least 110 trees will be felled in Cubbon Park for the Metro.

In August 2009 a pillar bent on CMH Road, killing two and injuring four. Three months later, in October, a rod from the Metro’s MG Road site crashed on the windshield of a car. Luckily no one was injured. While the metro work is progressing at full speed, these incidents left the public asking more questions.

Manwhile, after a 10 month delay, the 800-odd crore elevated highway on Hosur Road is almost ready and expected to be open shortly.

Staying on the infrastructure topic, the BBMP had its own plans for Bengaluru. Whether it was the Puttenahalli underpass in JP Nagar originally scheduled to be completed in February 2009 or the Tagore circle underpass which Basavanagudi residents objected to, the BBMP was left scurrying for answers.

Citizen Matters broke the news of BBMP’s Technical Advisory Committee approving 80 grade separator projects across the 12 arterial corridors in the city.  But it’s the massive road-widening projects, now said to include more than 100 roads, across the city, which made people gasp.

In August, BBMP officials made red markings on the walls of buildings on 15th Main Road, JP Nagar. Residents worried about having to give up a portion of their property. This was the case in different parts of the city as well – Tannery Road, Hennur Main Road, Karkere Main Road and so on. Worse, most residents in the city were unaware of the TDR scheme, meant to compensate owners for the property loss.

Another area of work that BBMP looked into was waste management. The new BBMP Commissioner Bharat Lal Meena inaugurated the Zero-garbage zone in Gandhinagar on August 15th. On the same day, a citizen initiative called ‘Clean Bengaluru’ saw many coming out on the streets to pick up litter. Through the year, citizens took the initiative to promote solid waste management at the community level. The BJP’s Legal and Legislative Cell is looking to bring out a draft legislation to make solid waste management compulsory by the end of January 2010.

In Bangalore North, Citizen Matters tracked the work of a railway overbridge in Whitefield. Battling a delay of more than two years, the project received the sanction of the Commissioner of Railway Safety only earlier this year. Residents living nearby even offered to mobilize funds for the project to complete it sooner. Even as work on the bridge restarted in November, the contractor said they do not have funds to lay the road. But they did add that they are shooting for a January 31st 2010 deadline. Will this deadline be met? Citizen Matters will keep you updated.

Yet another road controversy

In February, the BBMP headed by S Subramanya, invited tenders for the Yelanka-Bellary Link Road, which passes through the Gandhi Krishi Vignana Kendra (GKVK) of the University of Agricultural Sciences’. Work on the project began towards the end of March with the demolition of GKVK’s compound wall and felling of trees. But the Board of Regents of the University objected, saying the project will affect the biodiversity and research in the campus. In August, the Board did a u-turn and approved the road, albeit on a different alignment. Citizen Matters learnt that it was Subramanya, now posted as the Principal Secretary of the Agriculture Department, who was part of the Board, who reintroduced the issue as he was strongly in favour of the project.

The next month, seven former vice-chancellors filed a PIL against this project in the High Court (HC). On September 25th, the HC ordered a stay on the felling of trees by the BBMP within the campus, until further notice.

In December, however, the University changed its stance twice. On December 14th the University’s Counsel stated that the BBMP was just widening an existing road and seemed alright with the project. Two days later, the University represented by a new lawyer, categorically objected to the road. This u-turn, however, did not go down well with the HC which adjourned the hearing to early January.

Bangalore on the move

If the BBMP was making its own plans, citizens also took initiative. 2009 saw a variety of proposals submitted by resident welfare associations, citizen groups and not-for-profit groups, notably on transportation issues. RideACycle Foundation submitted proposals to the Bangalore Metropolitan Land Transport Authority (BMLTA) to build cycle tracks. Even as these discussions took place, the BMLTA Commissioner changed twice in one week. The status of the projects still remain unclear.

In November, online community Praja came out of their virtual world to host an unconference on sustainable transport.

A(H1N1) flu and its repercussions

2008 may have been the year of the mosquito for Bangalore, thanks to chikungunya. Even as hundreds of chikungunya cases were reported in the city, it was the A(H1N1) influenza or Swine Flu that drew all attention. July and August saw scenes of panic in the city. City schools closed down for days, people lined up in hospitals to get tested, masks were being sold in black. So far, more than 100 people have succumbed to the flu in Bangalore alone.

The year also saw Bangaloreans recovering from 2008’s recession-hit economy. The city’s major global firms did admit to a round of layoffs. Even shops and businesses reported a drop in sales. The real estate and garment manufacturing sectors were also hit. Mixed reactions came from educational institutions, firms and the people themselves. But as usual, Bangalore bounced back and is now said to have recovered. All said and done, here’s hoping for an even better 2010 for the job market in the city.
ABIDe, works coordination, international airport and more.

For a city that has been grappling with development issues, the Chief Minister’s Agenda for Bengaluru Infrastructure Development (ABIDe) task force stayed in the news through a major part of the year. It all started on February 11th when the CM launched Plan Bengaluru 2020, an initiative to bring back a Bangalore of Kempe Gowda’s dreams.  Whether it was the failure of the Hop On Hop Off (HOHO) bus service or the success of the Big 10 bus service, this expert committee tried and tested.

But it  was ABIDe’s Bengaluru Governance Bill draft that remained in the spotlight. Based on the Kasturirangan Committee report, this draft recommends the need for a Metropolitan Planning Committee, elections to ward committees, direct election of a Mayor and much more. Even as the Chief Minister heads the committee, his party colleagues told Citizen Matters that they are against elected ward committees.

Whether ABIDe recommendations are actually considered became a point of conflict, when Rajya Sabha MP and ABIDe Convenor Rajeev Chandrasekhar offered to resign from the task force on December 21st. 2010 will decide the fate of this expert committee.

But it was with ABIDe’s support that, in November, the state government introduced the Public Works Coordination Agreement (PWCA) to ensure better coordination between civic agencies and the Bangalore Traffic Police during short-term road projects. This new year will tell us how effective this agreement will actually be.

Just a day before Chandrasekhar offered to resign, he was in the news. But this time, it was to do with the Bangalore International Airport (BIA). On December 21st, a joint House committee of the Karnataka State Legislature recommended blacklisting the builder constortium L&T, Siemens and Unique Zurich Airport citing “poor quality of workmanship” in the construction of BIA. The committee also indicted those involved in important decisions on the project, including Infosys Chief Mentor N R Narayana Murthy and Chandrashekar.

Will 2010 see a Bengaluru city council?

The year 2009 is also when the BJP made history. Bangalore voted for the Lok Sabha elections on April 23rd. On May 16th, results showed that all three MP seats were bagged by the BJP, for the first time ever. C N Ananth Kumar, P C Mohan and D B Chandre Gowda were voted to power.

Even as national elections happened quit`e smoothly, Bangalore continued without a council. In March, the HC directed the state government and the State Election Commission (SEC) to hold the BBMP council elections before the end of July, which was not followed. In July, the HC directed the state and the SEC to hold elections within three months. The same month, the state government issued the final notification on the delimitation of wards which had increased from 147 to 198.

Finally, on November 30th, the draft reservation list was released. A week later the SEC announced the poll schedule, with voting day on February 21st 2010. But the reservations case is now with the Supreme Court with the next hearing on January 4th. The big question is, will the elections finally happen as scheduled?

The year ended with the sad demise of singer C Aswath, and actor Vishnuvardan.

As the year went by, there have been both hits and misses. Citizen Matters will keep a watchful eye on developments during the coming year, and keep you informed. Here’s wishing Bengaluru a happy and prosperous 2010!    ⊕

All important news from the last week – the news from Bengaluru you don’t want to miss – all in one place.

Why elderly people in family go missing, and how to deal with it

Bad news first: Dementia has no cure. Good news is, the conditions could be improved with proper care. Here’s your guide to understanding dementia and the facilities for patients in Bangalore.