Ever looked for an indulgent dish to devour at the end of a week that was beset with mundane meals? If yes, then Vidyarthi Bhavan’s legendary ghee soaked Dosa fits that bill.

Located amidst the clamour of the crowd at Gandhi Bazaar, this restaurant could be hard to find if you went "looking" for it. However, if you went "asking" for it, you’d be adding to the Vidyarthi Bhavan’s waiting queue in no time – a testament to the popularity of this long standing restaurant. 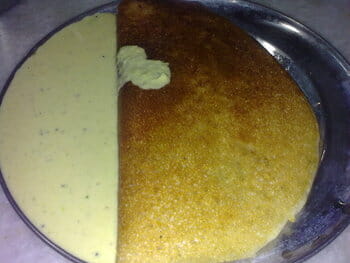 This restaurant has been garnering the admiration of its patrons ever since 1938. Their fan base consists of people of all age groups – from kids who love the kurum kurum (crispy) Vada to the elders who like the filter Kaapi. Their signature dish however, is their Masala Dosa. If the sight of the waiter carrying about 15 dosas at the same time didn’t catch your attention, the ghee oozing out of your dosa onto your plate most certainly will. This crispy dosa – considered to be one of the best dosas in Bangalore – certainly lived up to my expectations. Although accompanied by a large helping of chutney, the sambar, which isn’t offered with the dosa here, is sorely missed.

For breakfast, they also serve other items such as Idlis (with sambar and chutney), Khara bath (also called Upma in a few places ), Kesari bath (the only sweet dish offered by them) as well as Pooris. Among these, the Pooris which are served along with Sagu (vegetable stew with coconut gravy) are the pick of the bunch. In the evenings, the extremely popular Rava Vada, serves as an appetizer while the main course (dosa) arrives. Interestingly, I felt that Vidyarthi Bhavan’s best dishes are their most indulgent ones. Despite its hype, I must say that I found the coffee to be very average and comparable to that found in the Darshinis and Sagars located in every nook and corner of Bangalore. 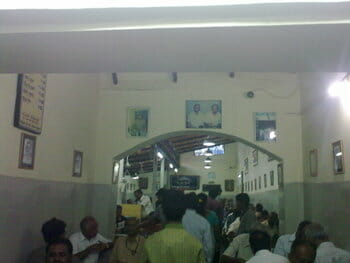 One of the most important reasons for Vidyarthi Bhavan’s popularity is the value for money that is offered by them. For a meagre 50 rupees, one can have more than a "full-filling" snack comprising of a Masala Dosa, Idli, Vada and coffee. What’s better is that they have managed to retain the same quality of food that gained them popularity a few decades ago. That being said, they have not been reluctant to tweak a few aspects of their service to keep pace the modern day requirements – offering tissue papers instead of newspaper pieces is one such change.

This pride of Gandhi Bazaar welcomes its customers on all days except on Fridays. Their location is central, but this brings along with it the dreaded parking issues. The restaurant is also perennially crowded and having to wait for a table cannot be avoided. What’s irksome however, is that those who are waiting for a table are expected to stand in the aisle, next to the "soon-to-be-empty" tables. This could be an disconcerting experience for those who are in the process of finishing their snack as well. Thankfully, the service is brisk and alleviates this misery quickly.

Vidyarthi Bhavan’s décor, which gives the feeling of dining in the living room of a really old house, blends well with its traditional menu. This feeling is further reinforced by the attire of the waiters who are clad in traditional dhotis. The walls are decorated with portraits of eminent personalities of Karnataka as well as photographs of celebrities who have dined at this historic restaurant.

So, in a world filled with pseudo-authentic restaurants with flashy lights and snazzy menus, head to Vidyarthi Bhavan to experience the true taste of old Bangalore’s vintage cuisine.

Vijayanagara Vaibhava to be recreated on streets of Bengaluru

250 Metro viaducts will be painted like the pillars in Hampi, and Metro boulevards will be adorned with replicas of stone monuments, in Bengaluru.