For years now, Bangaloreans have gotten accustomed to seeing dug up roads across the city. Furthermore, one doesn’t know who has dug it up or why and when it is likely to be closed. And then traffic suffers. The traffic police are clueless about the roadwork and are then forced to divert traffic.

"Sometimes we don’t even know who has dug up the road", points out Praveen Sood, Additional Commissioner of Police (Traffic).  Nothing new in namma Bengaluru. Coordination, or the lack of it has always been a challenge for many local authorities – BBMP, BTP, BWSSB, BDA, BMTC, and so on.

But times are changing and Bangaloreans can now expect some much-required change in the functioning of various agencies. Take the case of a sewerage line being repaired by the BWSSB in Ulsoor, between MEG Gate and Sathyanarayana temple. The water board and traffic police have signed what is called the Public Works Coordination Agreement (PWCA), a first of its kind system introduced in Bengaluru. This is to ensure better coordination between these agencies and divert traffic accordingly. 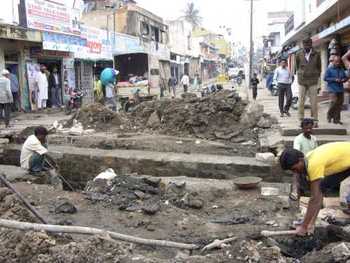 BBMP/BWSSB work on Hosahalli Main Road, Padarayanapura in Vijaynagar. Traffic has been diverted on this road till December 28th. Pic: Vaishnavi Vittal.

The signatures indicate that the agenices have ‘approved’ the execution of the project, keeping in mind their respective areas of work. It is also a way for them to be aware of the details of such projects.

The state government, under the support of the chief minister’s Agenda for Bengaluru Infrastructure Development (ABIDe) task force, has introduced the PWCA. Dr Ashwin Mahesh, Urban Strategy Advisor for the Government of Karnataka and Member of the ABIDe task force says, “The agreement is between all the city agenices, and they have all agreed to work through this mechanism”. He adds that this was agreed upon at a high-level coordination committee meeting in November, chaired by Dr Ravindra, Advisor to Chief Minister on Urban Affairs and ABIDe task force member.

The agreement though is not mandatory but “a gentlemanly agreement between various agencies under the aegis of ABIDe”, says Sood.

This is a sample copy of the Public Works Coordination Agreement introduced by the state government. Click picture to enlarge.

Mahesh explains that when a road-work project is taken up, say by BBMP, BESCOM, BWSSB or any other civic agency, they should mention the nature of work in this agreement. This should include the date of starting the work and date of possible completion. If say, telephone lines have to be shifted for the project, the executing agency should write to the BSNL asking them to shift the lines.

Likewise, if any other agency is involved, the main executing agency should get a signature from these agencies and then carry out the work. In case of BBMP-related works, the BTP will sign the PWCA last. In case of work to be carried out by other agencies, BBMP will sign last.

In the case of the BWSSB work in Ulsoor, Sood says that the BWSSB has stated that the work will take three and a half months to complete. The start and end dates mentioned in the agreement are November 16th and February 28th, he says. “It will be some kind of a moral binding. Let’s see what happens”.

Sood also cites two more examples where such agreements have been signed. For replacing a sewage pipe on Chinmaya Mission Road in Indiranagar, the BWSSB and traffic police have signed an agreement. As per the PWCA, this work is between November 25th and January 10th, he says. A private company, Tata Communications are laying electric cables on Mahatma Gandhi Road, for which they have signed the agreement along with the BBMP and traffic police. Sood says that the schedule for this work is between December 11th and March 2nd.

The PWCA is to be used only for short-term projects that require cutting of the road and blocking/diversion of traffic. Sood says that for long-term projects like flyovers and underpasses, this agreement will not be used as they require a different kind of traffic management. Neither will it be applied for very short, one-day type works.

Sood also explains that the Bangalore Traffic Police will block or divert traffic only after the executing agency brings their raw material to the site and is ready to begin work. He says that such an agreement is necessary since very often roads are dug up and not restored, or a project is started but not completed.

“Any development affects us. So there is a need for coordination. We (the public) are the biggest beneficiaries”. Sood says that it will take about 15 days for the necessary agencies to sign the agreement.

Mahesh says that the aim of such an agreement is to create a process where each agency is told about the work. It brings about accountability and also gives an opportunity to document everything, he says.

The agreement was to be used for some BBMP/BWSSB work in Vijaynagar. However due to an emergency, work started immediately, prior to signing the agreement. The traffic police have diverted traffic here, in coordination with the BBMP. Pic: Vaishnavi Vittal.

Even as this attempt has been made to bring about coordination, the PWCA has not been used in some cases. It was about to be used for a project on Hosahalli Main Road in Padarayanapura in Vijaynagar, where the BBMP and BWSSB are working on constructing a culvert and repairing pipes respectively. Sood says that this work had to be started immediately as drinking water and sewerage were getting mixed up.

“The PWCA is for projects, not emergencies. The DCP (West) did tell me. But we will get it signed”, he says. This work is scheduled to be completed in 15 days. The traffic police, however, have diverted traffic by not allowing vehicles between Kuvempu Circle and Sangam Circle on Padarayanapura Main Road. This is in force between December 14th and 28th, almost 15 days.

Sood says that coordination always existed between agencies, but it was more on a person-to-person basis. “This is the first time we are documenting this and institutionalising the procedure”.

Sood states another example where this sort of coordination took place without even having to sign an agreement. This was when the BBMP asked the traffic police to divert traffic on Bannerghatta Road, near the marble market, in order for them to close a culvert. “We felt that the road need not be blocked. The work can be carried out without blocking traffic. In the last stage of the work, if necessary, we will block traffic”.

Sood feels that such agreements will bring about some much-needed discipline. “The system is getting established. We are going through a learning curve”.   ⊕

No one wants the textile waste, or pay for their transport to reprocessing units

The textile waste industry has to deal with an endless list of different fabrics which cannot be recycled and have to be incinerated.