Standing outside his house, one feels quite dwarfed*. And that’s purely because of the sheer size of the house. Massive would be an understatement. The name plate in Kannada, bold and big, reads Katta Subramanya Naidu. A policeman and a security guard greet me at the gate, expecting my arrival and lead me right in. As I wait in Naidu’s office, his staff and I exchange pleasantries, as they begin the day’s work. After a cup of coffee, a gentleman informs me that “sahibru” will be down in about 20 minutes. “He came late last night because of work, at one in the morning. He is still sleeping”. 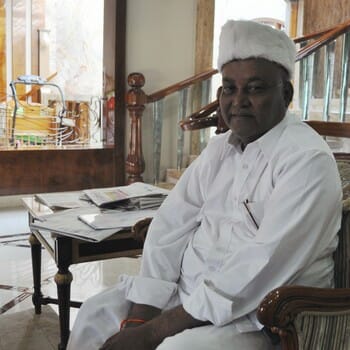 After more than an hour, I’m taken into the main house. As I walk up the grand flight of stairs, lined with dark wood railings, I quickly take a glimpse of the ground floor of the house. An elevator lies hidden in a corner. A six-seater dining table stands to the left. At the centre is a large television set. Walking up, I see the BJP MLA seated on a sofa, his back towards me. It’s a Saturday morning and he is reading a newspaper. As I greet him, he asks me to be seated and quickly adds, “Start”.

Said to be a close aide of Karnataka Chief Minister B S Yeddyurappa, Naidu is a BJP MLA from Hebbal constituency. He is Karnataka’s Minister of Information, Biotechnology, Science and Technology, and Excise. He is also Minister of BWSSB and in-charge of Bangalore North. Most importantly, he is one of members of the cabinet subcommittee looking into the ABIDE-proposed reforms for Bengaluru’s city government.

Dressed in a white dhoti and white shirt with his trademark white cap, the 58-year-old politician speaks to Citizen Matters on matters surrounding the upcoming BBMP elections in this ten-minute interview.

There is a lot of energy in resident welfare associations, citizens forums as well as urban poor workers unions to float independent candidates for the council elections. Margins last time around (2001) were very thin in many wards, and this time the wards are smaller. Many are frustrated with mainline parties. How is your party planning to fight the independent surge – especially among the well educated voters – this time?

Administration runs on a political system and the recognised political parties have more strength than citizen forums. For example in the 1960s and 70s, there were so many regional groups and other social activists who contested the elections. They tasted the dust. It will never become true that the citizen forums or independents will play a major role. You should have a policy and a dedication and a political background. People will think on these lines and they will elect the people. As far as the BBMP is concerned so far no citizen forums got elected or independents ruled the city corporation. Only the recognised political parties were ruling the BBMP elections. Now also it will be the same and our party will win and it will take the lead in the BBMP elections.

ABIDE has proposed elections for ward committees. Some politicians are saying they don’t want elected people on ward committees other than the ward councillor. What is your take?

It is under examination. We will examine thoroughly and finally decide on it.

Is this widely being discussed in the party? What is the general party consensus on this?

We are yet to discuss. We are discussing. Discussions are going on. We will take confidence at the organisation level and the MLAs and MPs and MLAs and MLCs and senior citizens of the societies. And when experienced retired officials, all these people will be taken into confidence. Then we will come to a conclusion.

Don’t you think such (ward) committee elections will open up parties like BJP/Cong/JDS, etc., to newcomers from the ‘educated’ public and youth for small local responsibilities? Currently parties are not usually able to attract such talent.

I don’t accept this. Because in the political system, systematically, automatically, younger generation will occupy the seats, their share. See in our party more than 30 MLAs are below 35 years age. Majority of the youngsters has been identified. Some of the MLAs are above 60s. You will be knowing. That means automatically youngsters will take, will fill the gap. There will be no doubt about it. I don’t think that only by providing this and that, things will happen. We should not worry about it.

What are your thoughts on the direct election of a Mayor, but with expanded powers? If you were the Mayor for 5 years, what power would you like the post to have, that is not there in the current KMC Act?

We are thinking to have a separate Act for Bangalore. In that we will discuss in our party forum and also the Opposition and also the elected representatives and then finally we will decide whether it should be direct election or nominated. It is not yet decided. (He ducked the critical part of this question on powers he would like a mayor to have).

Why is the election code of conduct going to come into force only on January 15th? Is the government buying time to pass the ABIDE-proposed reforms into law?

But are you looking to pass any reforms by that time?

Moving away from elections to water-related issues. The city is facing a lot of water problems, especially Bangalore North, which you are in-charge of. What is being done in the next few months to check this?

There is two ways of solving the water crisis. At present we are getting 850 MLD (million litres per day) of water which is not sufficient. Previously we were having 2 lakh connections. Today we are having 6 lakh connections. In 2002 we were supplied 850 MLD of water to Bangalore. Today also it is 850 MLD. Previously it was 250 (sq) kms. Now it is 800 (sq) kms. Area has been expanded. Population has been expanded. But quantity of water supplied is the same as when the population was less. Now the population and area has been expanded but water supply is not there. For that now Cauvery 4th Stage 2nd Phase work is going on. Now already works has been awarded, tenders are opened and works has been given.

It will take another three years to take the water from Talacauvery to Bangalore. Another 500 MLD of water will come. That too will not be sufficient that time for citizens. For that we are thinking of recycling water in the STPs, Sewerage Treatment Plants. We are providing 20 STPs in various parts of the city. We will be supplying the non-domestic water for the purpose of non-domestic use such as construction of buildings, roads, washing of cars and other materials, for non-potable purpose we want to utilize this water, recycled water. So that this recycled water and water that we are going to drink, another 500 MLD, will solve the problem of Bangalore citizens. It will take another two and a half to three years.

BBMP elections on 21 Feb, voting on a Sunday
Bengaluru awaits reforms, amidst the Yeddy vs Reddy turmoil
Why BBMP elections are not happening

Ejipura to Agara, who gets land, who doesn’t

When it comes to adequate, planned housing for the poor in Bengaluru, the government offers little land and lesser money. But when it comes to SEZs, hotels, layouts and apartments, there is always land available. Part II of the series.