The Namma Bengaluru Awards, set up by the Namma Bengaluru Foundation, has received a whopping 3902 nominations from across the city. The nominees include a banana leaf-seller R V Badraiah, Sr Adeke Korah who counsels prisoners, police sub inspectors and a BBMP official. There are two categories for the awards – the Public Officials and Agencies category and the Private Citizens and Institutions category.

R V Badraiah: A banana leaf seller, however have arranged drinking water facilities in all the neighborhood bus stops.
Sister Adele Korah: A former school principal. After retirement she devoted her time to counseling prisoners and educating children of prisoners.
Ravi K Shah: An entrepreneur who imparts free training programs and counseling to people below poverty line, thus enhancing their employability, personality development. Has been responsible for many job opportunities in his neighborhood.
Somsekhar: A police sub inspector who have gone beyond the call of his duty to solve a recent murder in the city.
P N Ganesh: A police sub inspector, who scaled Mount Everest to spread the message of universal brotherhood.
B.S Prahllad: BBMP Executive Engineer, Projects, Division 1, Yelahanka: Gone against several odds to make Yelahanka what it is today.
Source: Namma Bengaluru Awards

The Namma Bengaluru Awards were launched in October this year, to recognise ordinary citizens who have made a difference in the city. The Namma Bengaluru Foundation, a non-profit trust, headed by Member of Parliament Rajeev Chandrashekar, is the promoter of the awards.

Private Citizens and Institutions
Aimed at recognizing efforts of citizens and private institutions including NGOs, RWA, Companies, schools and others

“Namma Bengaluru Awards have proved to be a real star finder and I am glad to be a part of the process”, said Chandrasekhar, speaking at a meeting between the jury members and awards advisors PricewaterhouseCoopers. All entries for the awards were nominated by the general public.

The final stage of the award process is unfolding, and the panel of jury members will now decide on the winner in each category.

Says Lokayukta Justice Santosh Hegde, a jury member, “I would look for someone who has contributed for the development of Bangalore, as also something unique, something that they may not have done during the course of routine work”. He, however, remains tight-lipped about the yardstick based on which the winners will be chosen.

Another jury member, Chandrashekar Hariharan, CEO, Biotech Consortium India Limited (BCIL), says, “…the awardees will be champions who nurse a strong sense of integrity and altruism, who strive without an eye on reward, who take joy in offering their best, who have continued to do selflessly, although they are unsung and unhonoured”. 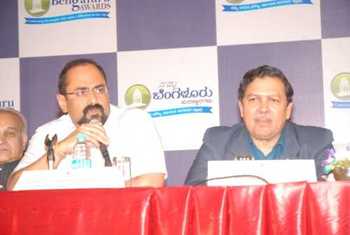 Chairman of the Jury Rajeev Chandrashekar and Justice Santosh Hegde at a press conference on the Namma Bengaluru Awards. Pic courtesy: Namma Bengaluru.

Infosys Human Resources Head T V Mohandas Pai says it’s the silent workers who will be honoured through these awards. “Selfless service, compassion, putting societal needs above self, obedience to laws and norms and above all leadership are some of the qualities that we would expect”, says this jury member.

Dr Ruth Manorama, women’s rights activist and jury member of the awards, sums it up, as she says that “ordinary citizens doing extraordinary things” will be recognised.

The list of finalists is due to be announced by the end of November. The winners will be announced on December 12.

We, Malleswaram Swabhimana Initiative (MSI), a resident’s welfare association, have been short listed for Green Star awards. Finally we are being recognized for the work that MSI has done in the field of waste management.

Pawan Kumar’s directorial debut is made for the generation next, with a unique perspective.

Bangalore’s own little space for art that pokes fun at everything – from the nuclear deal to the city’s traffic woes.