Children of Government Kannada Lower Primary School, Kattigenahalli (Yelahanka Post) decided they had had enough. Potable drinking water at school had been a problem for them for a long time now. They approached their neighbours – Astra Zeneca. In a couple of days, they had a water filter donated and installed.

On the other side of town, children from RV Public School, VV Puram Bangalore were bothered by the chronic shortage of blood for emergency procedures. They launched a door-to-door awareness campaign to explore popular myths, and misconceptions about blood donation. The children persevered even when professionals and educated citizens dodged their queries. The result – a successful campaign with 55 residents registering and donating blood in just a week.

RV Public School, Bangalore is part of the top 20 entries in the contest. For the complete list of winners, see here.

This is just a sampling of the 124 entries from Bangalore at the Design for Giving (DFG) contest held this year, that covered a wide spectrum ranging from issues faced by the school such as water scarcity, garbage disposal to those affecting the environment such as the use of plastic bags; children also went on to facilitate literacy classes for other children from nearby low-income areas and some children undertook simple and thoughtful gestures such as visiting and spending quality time with senior citizens at a home. 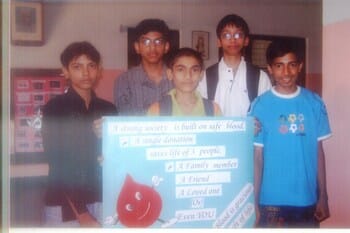 The Design for Giving contest is an initiative of the Riverside School, a private school in Ahmedabad  also works closely with children in low-income areas. It’s founder Kiran Sethi initiated the idea of this contest, when she heard of Joy of Giving Week. She felt it was important to involve children as they can be very proactive change agents. Other organisations and companies like IDEA, Disney, Gray Matters Capital, Design School, Stanford also joined hands in this initiative.

The contest was planned to coincide with the Joy of Giving week (from September 27th to October 3rd). The sole purpose  was to invite children to design solutions for India’s greatest challenges.  The contest was about making children believe that change is possible and that they can be the change. And the children have managed to make a difference in just a few days.

Over 1350 schools across India, including government, aided and private schools submitted their entries. Entries were invited in various languages too ensuring that language did not become a barrier to participation. An entry from a school for children with disabilities also demonstrated that there are truly no limits when you decide to change things.

A well-designed toolkit (developed by the organisers) with simple instructions was shared with all the participant schools and provided a simple brief to the children; which was – to follow a 4 step process
FEEL – where children and their mentor/teacher identify a problem that troubles them the most
IMAGINE – generate ideas for addressing the problem
DO – identify and implement one of their ideas during the selected week
SHARE- send in their submission form (in a self-addressed enveloped given as part of the toolkit!). Here, they could include photographs, presentations, and videos as additional documentation for their entry.

Though the contest was initially meant for 10-13 year old children, it was amazing to see powerful entries from 8-9 year olds too! Clearly, the contest was not about ranking schools 1st , 2nd , 3rd etc. Instead, the process reviewed the entries through entirely different lenses – for instance, identifying entries that were the boldest, most easily replicable, most environmentally friendly, had the quickest impact, impacted most people and those that lived up to Gandhiji’s values of self-reliance, humility, and serving the underprivileged.

The entries embodied these values. Eighth standard students of Delhi Public School (Bangalore South) decided "to give back smiles to senior citizens living in an old age home". They have interacted with the senior citizens with sensitivity and maturity. The happiness and joy that the elders feel is evident from their smiles and the anecdotes they share. India International School (Bangalore) students decided to teach children of construction workers.

The prize distribution ceremony will be held at Ahmedabad on November 27th. And next year, perhaps you could help a school from your area to participate in this exciting and inspiring initiative.

Most of Bengaluru groundwater not potable

With Cauvery phase II delayed most of the city still depends on groundwater. But the presence of nitrate, iron and flouride above permissible levels is a worrying factor.

In the past, children would flock around his cart as he molded candy into whatever shape they wanted. Meet the Bombe Mithaiwala!

RWAs in Bannerghatta road came together to launch their own portal. They also shared information on issues like RWA registrations and solid waste management.