The Technical Advisory Committee (TAC) of the BBMP will soon begin to decide and approve all major road projects in Bengaluru’s limits. This is confirmed by the Technical Advisor to the BBMP Commissioner and Member of TAC, H Raja Simha. So far, the TAC was approving grade separator and road widening works for the BBMP along the 12-arterial corridors (major roads going out of the city) only. For grade separator projects outside the corridors, TAC was not involved. But now, Simha says a decision has been taken for all such projects to be sent to TAC for approval. Additional Commissioner of Police (Traffic) Praveen Sood, also a member of TAC, confirms this. 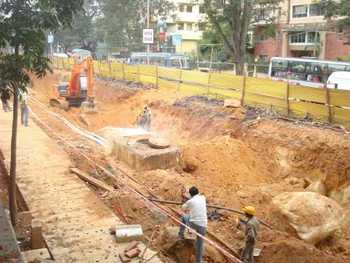 This move comes in the light of the controversy surrounding the Tagore circle underpass in Basavanagudi. This proposed underpass has kicked up a storm as citizens, politicians and some traffic experts in the city question the reason for constructing the underpass. Most of the resentment is centred around the opinion that traffic at the intersection may not warrant an underpass at all.

The project was approved in 2006 but work started only very recently and ran into citizen resentment. “The Commissioner referred the problem to us after all the hue and cry”, says Dr B R Srinivasa Murthy, Former Professor at the Indian Institute of Science and Acting Chairperson of TAC. At the time of approving this project (in 2006), TAC was not formed. Murthy says that the TAC members visited the project site on Tuesday (November 3rd 2009) and spent around two hours there. “We then arrived at what should be done. It is not prudent to close it now”, he says.

Underpasses are a type of grade separator like flyovers and are built when traffic flow reaches a certain level. Simha says that according to the study by Stup Consultants (who were assigned to carry out the study), the peak load at Tagore circle in the morning is 10,645 pcu (Passenger Car Unit) per hour and therefore the underpass is justified. Traffic expert and member of Agenda of Bengaluru Infrastructure Development (ABIDe) Task Force, Professor M N Sreehari rubbishes these numbers. “If it is 10,000 vehicles per hour, that’s about 300 vehicles per minute. How is that possible? They are just trying to fool somebody. We want to know how they got these numbers. Why should they cheat people like this?”, he asks. (10,000 pcus per hour translates to 166 pcus per minute.)

Sreehari says the current traffic flow at Tagore circle is around 4750 pcus/hour and therefore does not require an underpass. On asked how he arrived at the figure, he says, “Generally we calculate through random surveys”. He alleges that consultants would project the numbers wanted by the client, in this case the BBMP.

TAC claims to use general transportation guidelines for its decision making. Pcus (passenger car units) per hour as well as turning movements are studied.

• Over 3000 pcu/hour – a rotary is needed (circle). A circle allows traffic movement through a junction by space sharing at the circle.

• Over 5000 pcu/hour – a signal is needed. Signal allows the junction to be time-shared between the different directions of traffic.

• 10,000-12000 pcu/hour can still be handled by managing the signal and directions differently. For e.g. by converting two-way to one-way or by blocking right turns at the signal, an intersection can be used to handle higher traffic volume until 12,000 pcu/hour.

Sood says that TAC uses general transportation guidelines used around the world for decision making. “Both pcus per hour in the master directions of traffic as well as turning movements are studied”, he says, adding that these guidelines say that for about 10,000 pcus/hour, a grade separator of some kind is required at a junction. Sreehari agrees that a grade separator is required for pcu above 10,000 as per Indian Roads Congress (IRC) guidelines. And if the 10,000 pcu as per the BBMP is a projected figure, five to ten years from now, Sreehari says that the project should be executed then. “Why build it now? Don’t waste public money”. Simha of TAC was unsure if the BBMP’s figures were projected. “They must be for future. I’m not sure”.

Sreehari also argues that there are other junctions in the city which have worse traffic and would require an underpass. He cites examples of South End Circle, Minerva Circle and Peenya junction. On questioning Simha on this, he says, “There could be. No, I won’t be able to name them”.

Murthy argues that it is not just about pcus. “This underpass will provide a link to K R Road, Banashankari, Mysore Road and so on”.

Citizen Matters was unable to reach officials at Stup Consultants to confirm the numbers mentioned in their study.

Other problems with the Tagore Circle underpass

BBMP’s TAC has found issues with the way the underpass is being built. Murthy explains that one key problem is that BBMP has not acquired land for the slip road. A slip road is the road on either side of the underpass, on ground level. He says the entire width of the road should be 33m but is currently around 27m to 28m. He also says that there should be space for footpath of 2m on either side, 0.5m for storm water drain, and 0.5m for the crash barrier. The people traveling on the slip road should be able to take a left or a right turn at the junction, he says. “Right now the slip road is small. For this they should acquire land. So the blunder committed by the BBMP is they haven’t acquired land”.

So what will happen to the Tagore circle underpass? Simha remains non-committal as he says, “I have some new plans. We need to get clearance from the Commissioner. I can’t comment till then. We want to do a holistic review. I’m suggesting some modifications to the Commissioner. We want to improve it”.

He added that TAC agrees that by the new pre-cast element magic-box technology, the cost of the underpass could have been lower than Rs 19 crores. “It may come to Rs.10 crores or so by this method”, he says, but was not categorical. (Rough calculation: add the cost of the pre-cast 7.5 m magic box elements with junction treatment costs to arrive at an alternate total.)

Murthy, on the other hand, says that the committee has laid down conditions for implementation (for similar projects it oversees on the arterial corridors). This should include land acquisition, slip road, and footpath and that the project should be completed in six months time, he says. An agitated Sreehari says that the public will take the matter to court. “It’s a tranquil area. Why do you want to spoil it?”, he asks.

What is the Technical Advisory Committee?

BBMP’s TAC was set up in 2007 after an order by the Karnataka High Court to set up a committee to look into road construction projects of the BBMP, says Murthy. He says that initially there were three members, himself, B P Nithyananda and Prof C E G Justo.

Simha says the committee meets once a fortnight to approve projects on the 12 arterial roads, to convert them into signal-free corridors. For these projects, the BBMP’s Engineering Department prepared the designs and sent it to TAC for approval, says T N Chikkarayappa, Chief Engineer (Major Roads).

Simha explains that TAC comes in at the planning stages when they review the project, discuss it and take a decision. If they approve it, it then goes into the engineering department of the BBMP for tendering and execution. As part of their work TAC commissions traffic studies based on which decisions are made. If underpasses are not technically feasible, they will consider doing overpasses.

This is an evolution of TAC’s powers with the BBMP itself, since this wasn’t how the TAC had originally been functioning. Earlier, it appears TAC was an optional part of the process. Murthy says, “If BBMP and its administration wants advice or wants to consult us, we’ll suggest a sequence of operations. Detailed Project Reports (DPR) will be prepared by the consultants”. He goes on add that in the case of the magic-box underpasses by S Subramanya (Former BBMP Commissioner), he did not consult the TAC. “They can consult us if they want to”.

In the 12 arterial corridors of the city, “around 225 junctions are proposed to have underpasses”, says Simha indicating the number of candidate intersections under consideration. Of these, 80 junctions have been actually been approved by TAC for grade separator projects. 80 (DPR) have been prepared, all with the approval of TAC. TAC members Simha and Sood, as well as BBMP Chief Engineer Chikkarayappa confirm this to Citizen Matters.

If the TAC, as one central technical body within the BBMP is made responsible for all such project approvals, as opposed to the way it was earlier, accountability on decision making could become easier to track.

Even so as TAC proceeds forward with its revised approach for new projects around the city, controversy is inevitable for older projects being implemented now. At Tagore Circle, citizens and traders of Basavangudi are holding a protest at the underpass on November 7th 2009. Citizens are clearly sending a strong signal that they do not want the underpass.   ⊕

Builders’ community complains that the soaring realty prices will adversely affect the buyers, while the government says there will be more revenue flowing in. This will curb the flow of black money to an extent, while it will prove costly for buyers.