Devesh Agarwal of the Bangalore Chamber of Commerce and Industry disagrees with Albert Brunner, the CEO of Bangalore International Airport Limited on the latter’s recent interview to Citizen Matters on the airport controversy.

Albert Brunner, CEO of Bangalore International Airport Limited (BIAL) recently gave an interview to Citizen Matters where he said that Bangalore does not need two airports. In this this article, I will argue why the city does need to keep HAL airport open.

Indian low cost airlines are leading the current aviation surge being led by low cost airlines globally. Add to this an economic boom, and liberalisation of the Indian aviation industry, Bangalore’s air traffic has exploded; to a growth level just not anticipated, let alone planned for.

In the 36 month period that BIA was being constructed, traffic has grown 255 per cent from 4.1 million passengers per annum (MPPA) to almost 10.5 MPPA. With all due respect to the capabilities of the BIAL consortium, I dare say, there is no infrastructure project in the world, that can plan for, let alone handle this level of growth. 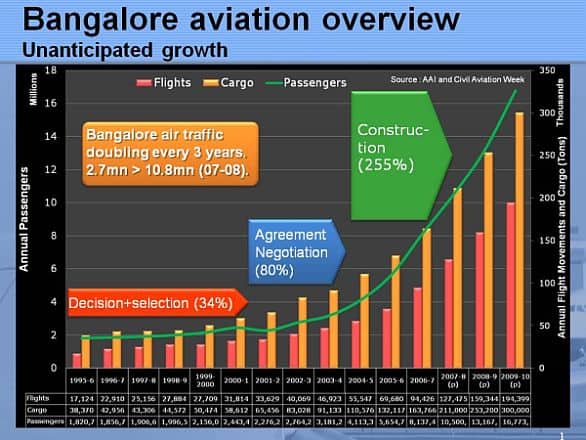 From terminal to airplane-stands to runway to airspace, an airport is a finely tuned integration of capacity points. BIAL has one runway just like HAL, and will handle the same 30 flights an hour.

As per BIAL’s own data, BIA single runway, is already at or near full capacity, from opening day, during the peak travel hours from 6AM – 10AM and from 6PM to 8PM. In fact the 6am-7am and 6pm-7pm hours are “over-booked”. 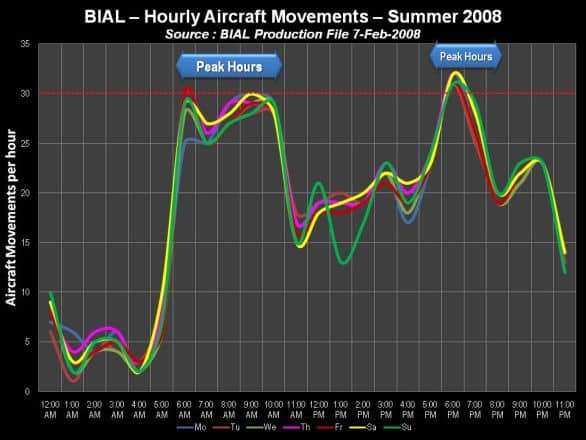 Importantly, we are still in the summer schedule, which is a lean time for air travel in India. The onset of the winter season in October, traditionally spikes demand significantly. Where will the additional demand be accommodated?

Additionally, BIA is already booked for an average 443 flights per day. IATA, the global air transport association recommends a maximum of 550 flights per day per runway, a limit confirmed by Mumbai, India’s most advanced and experienced airport (in terms of ATC operations). Therefore allows BIA less than 22 per cent expansion from its opening capacity.

Mr. Brunner’s indicates that BIAL is not planning any additional expansion for another 2~3 years. This raises two serious concerns:

It is time we get hard and clear answers from BIAL. Projected from now until the year 2018, I request BIAL to provide figures for:

The case for multiple airports

There are precedents all over the world that justifies Bangalore as a multi-airport city. Cities like Atlanta who have a very high percentage of transit traffic, need a large single airport, to justify the transit connectivity. Cities like Bangalore which have large originating / terminating traffic, have multiple smaller size airports.

Bangalore has less than 10 per cent transit traffic, and most of it is to land connected cities like Mysore, Hassan, Salem, etc. With the greater region around Bangalore ringed with international airports – Hyderabad, Chennai, Kochi, and Mumbai, I do not see any significant increase in transit traffic.

Take Brazil. It is clubbed along with India in the BRIC economic group. Its major cities like Sao Paulo and Rio have a situation very similar to Bangalore. An in-city, small, domestic only, airport operating in parallel to a large, out-city, domestic and international, airport. In all the Brazilian cities, both the airports are operating as commercial successes.

BIAL claims that only regions with very large traffic like New York, can justify multiple airports. New York City has 3 airports, which started when there were only 4 million passengers. They have grown TOGETHER to serve 100 million.

Seen inline with all this, Bangalore and BIAL are placing an enormous amount of trust in each other. Unfortunately in this partnership the flow of complete information seems to be only in one direction.

A commercial venture has to operate in harmony with the community it serves. The past episode of Enron, taught us, that a corporation or a commercial agreement which impedes rather than promotes its original purpose of serving the public interest, will cause opposition and resentment from the very public it was meant to serve. Let this not happen to BIAL or Bangalore. ⊕

Devesh Agarwal is a member of the Bangalore Chamber of Commerce and Industry.

You will be penalised for using the lpg gas cyclinder sparingly. You have to write letters, produce affidavits, and wait for weeks because you bothered to use it judiciously.