The plight of women and girls in the village of Golahalli on the southwestern outskirts of Bengaluru rose to prominence last week at Tokyo, at a major journalism awards ceremony conducted by the Asian Development Bank Institute. 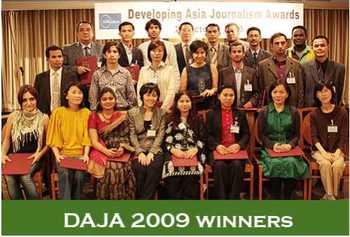 Supriya’s article, about a precarious future for young mothers and girls of Golahalli, was published in Citizen Matters on September 29th, 2008.

Supriya was one among over 20 journalists selected from around Asia who traveled to Tokyo last week to attend a four-day workshop and the award ceremony of DAJA. Every year the Asian Development Bank Institute (ADBI) invites journalists from developing countries of Asia and the Pacific to submit published articles, as a part of the annual Developing Asia Journalism Awards (DAJA) competition.

Supriya is not currently working at Citizen Matters and has taken a break from an intense schedule of reporting for the past one-and-a-half years. She returns to Bangalore in early January 2010 and plans to freelance for sometime. Citizen Matters wishes her all the best for her journalism career ahead.

Citizen Matters has been covering Bengaluru city online from November 2007 and went public in March 2008. A sleek 16-page Citizen Matters print fortnightly is also distributed in the south Bangalore localities of JP Nagar and BTM Layout. ⊕