It was a morning to be remembered for the residents around ‘Anandhavana’, a park and recreational are in 3rd phase JP Nagar. ‘Walkathon 09’ was held on Sunday, October 11th and saw an overwhelming response with over 200 participants in the various categories for men and women. 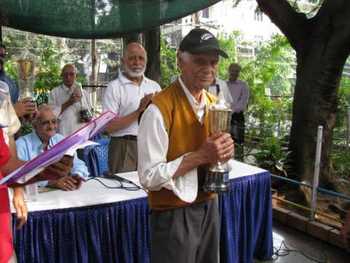 A winner of the event. Pic: T L Prabhakar.

It all began when a small group of 60 plus men sat one evening and discussed the disconnect of the walkers – young and old – with one another, though they would see each other’s faces every morning. Thus, they hit upon the idea to have an activity that would bring together all the senior citizens in the area, to begin with.

They were a large number of enthusiastic entries from both men and women in various age groups 60-69 years, 70-79 years and 80 years and above.

M R Srinivasan, former Chairman of the Atomic Energy Commission and a resident of JP Nagar presided over the event and distributed trophies. He urged every citizen to “make use of such facilities likes parks and lead a healthy and cheerful life”.

All participants above 80 years were given special mementos as a token of appreciation. Inspired by the enthusiasm that ‘Walkathon 09’ garnered among the residents, the organizers have planned a few events for children on Children’s Day. They want to give their share to the citizens of tomorrow! ⊕

About Amrita Sampathkumar 1 Article
The author has not yet added any personal or biographical info to her or his author profile.

“Career counseling and options: What can I do?”

A local panel discussion and info session on Career counseling and options, in JP Nagar, Saturday, 11th July. Specially for all parents and students!

Once upon a time when Sarjapur meant Muslin cloth…

Did you know about the time when rice was sold in Akki Pete, bangles in Bale Pete and cotton in Arale Pete? Here’s a peek in to the history of trade and commerce in Bangalore.

No one was ready to fund this film, but Pawan Kumar did not stop. Now, Kannada’s first crowd-funded film Lucia, directed by ‘Laifu Ishtene’ fame Pawan Kumar, has won the prestigious Audience Award in London Indian Film Festival.