Much is being said and heard about the difficulties that the new Bangalore airport (Bangalore International Airport Limited – BIAL) is likely to impose on the citizens of Bangalore. A few days ago, the High Court of Karnataka weighed in on a PIL and recommended that the government and BIAL renegotiate the original agreement, with particular reference to the steep user charges and on the option of keeping HAL airport open.

Last week, the central government floated its new greenfield airport policy, which does not explicitly bar a second commercial airport within a 150 kms radius of the first one. But it leaves the decision with to a government steering committee.

In this exclusive interview to Samuel Jacob of Citizen Matters over email, BIAL CEO Albert Brunner responds to a number of questions. Even as we publish this interview, talks between the central government (Ministry of Civil Aviation) and BIAL are in progress. The issue is likely to see more developments over the coming weeks.

Is the new airport scheduled to start operations in May?

The airport is completed and we are ready for opening it at any date in May. The opening date has to be confirmed by the Ministry.

What has been the feedback from various airlines on the new Infrastructure? Are there any concerns you have had to work on?

Many people from various airlines have visited the new airport. We have received a lot of positive, even enthusiastic feedback. For all of them the infrastructure at the new airport comes as a long-sought change as it is efficient and at par with international standards. 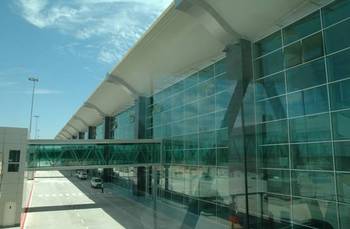 We also received positive feedbacks from the airlines as well as the pilots on the public trial day held on March 2008. The pilots of the two aircrafts (Kingfisher and Deccan Airlines) that participated in the flight trials said that the operating surface of the runway is smooth and it has good gripping power on the aircraft. They commented that the number of exit ways to the apron will allow aircrafts to exit quickly and will bring down delays caused due to aircrafts taxing to and from the runway.

Passenger traffic for 2008-09 at Bangalore is projected at 13.2 million passengers. What would BIAL’s traffic handling capacity for the same period be (in millions)?

A terminal is not designed to an annual capacity, but to a peak hour demand. Under the present traffic scenario, BIAL can easily handle the traffic for the next 2-3 years. During this time we want to realize the next expansion. Speaking of the future, the master plan of the new Bangalore International Airport has been developed to fulfil the need of an operationally efficient and passenger friendly airport for Bangalore. It ensures that the size and capacity of the airport facilities can be gradually expanded based on the passenger and cargo growth. The land at our disposal allows us to develop the airport up to a capacity of approximately 40 to 50 million passengers a year.

So what is the peak-hour demand that BIAL can cater to?

We can accommodate a peak hour demand of 2,730 passengers. Unlike HAL, the rapid exits on our runway make it possible for us to handle one flight every two minutes. HAL was designed for a traffic of 3 million and ended up handling 10 million currently. The new airport is designed for 11 million to 12 million passengers, we can easily handle the current demand. Moreover, we operate 24 hours round the clock.

Traffic projections for the BIAL airport were much lower when the deal was signed. (The current scenario is different — there has been an explosion in traffic.) Would you agree that this forms a basis for reworking the deal so that the government lets HAL carry select traffic for a mutually agreed upon period? If not, why not?

Yes, when the project was designed initially, we had anticipated a traffic volume of approximately 5 m passengers in the first year of the operation. However, this figure was already reached by the time we started construction. But we took up this big challenge to significantly increase the project which was already under construction and did not jeopardize the initial airport opening date. Completing the redesigned project within the original time period of 30 months from the time the construction began became more challenging, but we ensured that when we opened for commercial operations, we would be equipped to handle the domestic and international air traffic from Bangalore.

Commenting on the second part of your question, Bangalore needs a single aviation platform for both domestic and international traffic, to allow seamless transfer between domestic and international flights for passengers, cargo and efficient airline operations. All successful aviation hubs in Asia (Singapore, Kuala Lumpur, Hong Kong, Seoul) have developed out of such a single platform. Examples cited where a city has several airports (New York, London) have above 100 million passengers, compared to the 10 million of Bangalore.

BIAL is in discussions with major carriers in India to base their domestic and international operations at the airport. Once the new airport is operational, we are confident that the connections to Far East, Europe and even America will be improved. Since Bangalore has a strong business market and ideal location, the new airport will serve as a regional hub for South India attracting investments and businesses that will lead to significant growth and job creation. In the current scenario, Bangalore stands the chance to become a hub for south India as against Hyderabad and Chennai.

Some industry and public representatives allege that the government and the BIAL have cut a great deal for the latter, and BIAL is now sitting on super profits because of which it is unwilling to renegotiate the concessional agreement. Comments?

Your question itself suggests that these are allegations. It is important to note that an international consortia was created by the Government of Karnataka and the Airport Authority of India in 1999 to build own and operate a new Greenfield international airport in Bangalore through an open bid. The aviation landscape was very different then and the investment made by the private as well as the state promoters was a significant decision and as a step forward.

As explained above, the project itself has got redesigned (scope increased by almost 75 per cent) while already in the construction stage, this led to added investments. It will be years till this huge infrastructure project breaks even. India needs such projects which are focused on long-term investments and honouring commitments made will be a step forward to encourage Public Private Partnerships.

With the change in scope of design, what has the project cost come to?

From the initial Rs.1,400 cr, it went up to Rs.2,450 cr. Additionally there has been an investment of another Rs.1,000 cr from the concessionaires in cargo, catering and fuel.

When do you plan to have a second runway up? Are there legal impediments to this (the Air Force Base issue) that may not be totally in BIAL’s hands?

Keeping in mind the current traffic growth, the second runway will be required in the next 3 to 5 years. BIAL is already working on the next phase of this development. The runways of the air base at Yelahanka and those of our airport are absolutely parallel. Nevertheless the air traffic management will have to be coordinated. For this reason, Indian Air Force had worked out a so called Integrated Airspace Management Plan which was the basis for its NOC (non objective certificate) for our project.

A Parliamentary standing committee has criticised the user fees for BIAL.

The Concession Agreement specifies that BIAL will be allowed to levy UDF from embarking domestic and international passengers for the provision of passenger amenities, services and facilities. The UDF will be used for the development, management, maintenance and operation of the airport. UDF is a global norm. IATA has confirmed in writing after consultation that it is in agreement with BIAL’s proposed tariff set up. This issue is currently under discussion with the Ministry of Civil Aviation and we await confirmation regarding the same.

It has to be noted that even with the envisaged user development fees, BIAL will face losses in the first few years. Thereafter, before we break even, we have to invest again in the next expansion. The UDF is needed for sustaining a reasonable return on investment and with this to give the investors the confidence for future project investments.

Seventy per cent of India lives in rural areas. People who fly are a small percentage. Why should the public at large be asked to pay for the expansion. People who use the airport should pay for it.

If you head for renegotiation of the concession agreement, would BIAL seek compensation?

You will appreciate that this question is speculative and hence we will not be able to answer it.

Yes, regular meetings are held with the Board of Directors of BIAL. The last meeting was held in the last week of February 2008.

What did you like most about working on this project in India? Has it been a good, bad or ugly experience so far?

I have to say that it has not been that easy. Building a new private greenfield airport in India is much more than a construction project, it means setting up an unprecedented legal framework, coping with huge time pressure, recruiting and training personnel form a large talent pool with limited experience in airport management. It also requires selection of partners like caterers, ground handlers and retailers etc. who are willing and are able to provide service according to the highest international standards. It is not possible to realize such a project under the given time constraints without the full dedication of thousands of people involved (in the offices and at site) and without support from various authorities (Concluded). ⊕

‘Become the change you want others to be’

At a time when everyone feels Bengaluru is down in the dumps, V Ravichandar gave a stirring TEDx talk on 4 April, 2013, on how there is plenty to hope if civil society, businesses and the government can join hands.

My home, my city, my love – Bengaluru

There are many things about Bangalore that can and should be criticised. However, it is always better if the criticism is constructive, says this citizen journalist.