Karaga is one of the oldest festivals in Karnataka and is also celebrated in Tamilnadu. In Bangalore, the Dharmarayaswamy Temple in Thigalarpet (central Bangalore, between the City Market area and Richmond Town) has been the focal point of this festival. Karaga ran its course in the third week of April this year. These pictures were taken on the night of 20 April, a full moon. 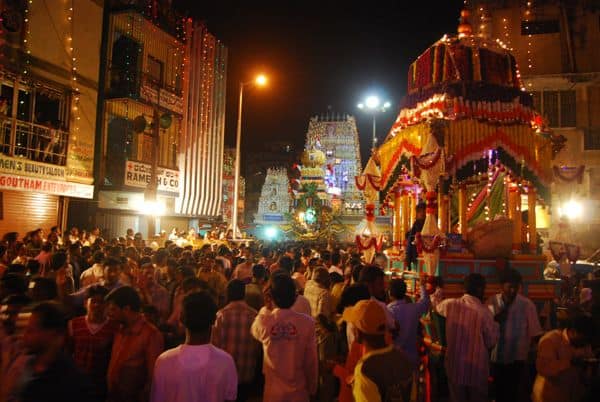 A huge crowd in front of the Dharmarayaswamy temple, this is the only entrance path used by the Veerakumaras and other followers. There were people as far as the eyes could see. People were on almost top of
every balcony and roof.

These are the Veerakumaras. They marched in hundreds from near the Corporation Circle towards the Dharmarayaswamy temple.

Carnatic exponent R K Keshavamurthy from Rudrapatna; he was sitting at a vantage point from where the Dharmarayaswamy temple was visible also and the proceedings. The music
was broadcast on huge PA systems and was heard all over the area.

Adishakti Draupadi is the community deity of the Vanikula Kshatriya Thigala community, and Karaga is the 9-day festival observed by them in reverence to the Goddess. The Thigalas believe that Draupadi Shakti (power) brims over during the Karaga festival and the Karaga carrier dressing as a female is symbolic of Draupadi.

This was a procession of another god that started somewhere near Minerva
circle. There was a number of processions like this and all of them finally ended up near the Dharmarayaswamy temple.

The karaga is expertly balanced on the carrier’s head. The carrier, in his temporary avatar as Draupadi, goes to the houses of the Veerakumaras where their families perform pooja to the karaga. The carrier is practically in a trance even as he dances along with the Veerakumaras (who are carrying their swords). By the time the procession returns to the temple it is dawn. ⊕

References
Text for this feature is courtesy of Wikipedia and Karaga.org. Citizen Matters has not checked the validity of any interpretations, and does not make any claims to its authoritativeness.

About Amoghavarsha JS 3 Articles
The author has not yet added any personal or biographical info to her or his author profile.

Do we wait for yet another child to be mauled before addressing the stray dog menace?

The National Gallery of Modern Art, Bengaluru has been open for public for over two years now. Has it managed to put itself on the city’s must visit map? Citizen Matters talked to its first director Sobha Nambisan.

Generally, it’s people of my age group who bother with civic issues. But that’s beginning to change, because of the likes of Sarfy. Here’s how.