Does it sound strange, travelling to work by train every day from Bangalore to Mysore and vice versa? Well some of us do.  Those who do, live in a different world and also in a different time scale. Regular commuters may not remember the time when Kaveri Express was introduced. 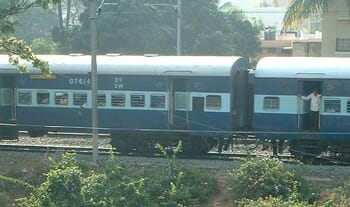 Kaveri Express was introduced in September 1980, around 30 years ago.

On the occasion of Kaveri Express’ anniversary on 11th September, below is an excerpt from Specular. Specular was a weekly general interest magazine focusing on news and information about Karnataka, which was started by K N Bengeri, a former Deputy Director, State Information Department. Some of my articles were also published in Specular, which was in existence for a few years from 1979.

In the eighties, it was common for like-minded people to get together and bring out small weekly publication. Nostalgia anyone?

Kaveri Express which would be regularly running between Bangalore and Mysore from next week had a trial run on September 4th 1980 with the members of the Press. The Union Minister of State for Railways and other top Railway officials accompanied the invitees. The super- fast Kaveri, capable of running at the speed of 100 kms per hour, the fastest  on the meter gauge section has eleven glittering coaches with its laminated interior and cushioned upholstery, specially manufactured by the Indian Coach Factory (ICF), Perambur, at a cost of Rs. 50 lakhs.  The all-coil ICF bogies have been designed to meet three vital requirements of tourist traffic  — speed , safety and comfort.  The new train will have a seating capacity of 750 and the coaches include a first class chair car.  Three of the second class coaches include a pantry car, luggage and guard van.

The first class chair car which can seat 48 in rows of twos with a central aisle and fully cushioned with adjustable back rest, each of which is also provided with a small in-built folding table, to facilitate eating.  The second class chair car can seat 80 passengers in rows of twos  and threes with a passage in between.  One half of the pantry consists of second class chairs to accommodate 40 persons. The interior décor of this prestigious train with an illuminated name board for it, has received special attention with carefully chosen matching shades and coloured scenic pictures of Karnataka.

The meter gauge between the two cities is under conversion to broad gauge and is likely to be completed by 1982.  With more number of trains and a broader gauge it would help developing the belt between the two cities industrially to ease the congestion around Bangalore.  There has been a phenomenal increase in the number of passengers from 6 lakhs in 1946 to 8.5 lakhs in 1979 between Bangalore and Mysore. Inspite of the fact that  more  number of buses are plying between the two cities the demand for quick transport is on the increase.  Very recently the railways have introduced the non-stop Tippu Express. Even then the tension is not eased.

Kaveri Express which is designed on the model of the Taj Express between Delhi and Agra- will run between the two cities daily.  For the benefit of the travelers breakfast , lunch and dinner packets are made available in the train itself.  The Railways are making efforts with the Karnataka State Tourism Development Corporation  to arrange sight-seeing at Mysore for which the tickets would be issued at the railway counter itself.  According to the present timings Kaveri will leave Bangalore at 7.30 AM for Mysore and from Mysore it will leave at 8.30 PM. The running time is two and half hours. ⊕

About Padma Govindaswamy 2 Articles
The author has not yet added any personal or biographical info to her or his author profile.

Express yourself, but not while driving

Plugged in human beings – be it phones or music gadgets, are a hazard on the road. On average, two die in fatal accidents each day in Bengaluru. How many of these are due to the distraction caused by cell phones while driving?

“Monitoring food safety: Why BBMP, not Central authorities, should be in charge”

If you are a cyclist, you may feel high end city hotels discriminate against you. It’s time for change. What a powerful green statement it would be if 5-star hotels provided a conspicuous bicycle parking rack at their entrances!