The next time you’re on the road at peak traffic time observe this. There’ll be a wannabe Michael Schumacher who’ll take off like a rocket at the signal, and you’ll meet up with him at the next signal. You’ll most likely meet up with him at every signal over the next 10 km.

Why does this happen, even though he’s driving faster than you? This is because of the ‘Schumi-Bang effect’, a scientific phenomenon caused by the interaction between Schumi’s vehicle and Bangalore’s roads. Here’s the explanation.

When traffic signals are close to each other, your average speed depends on how long you stop at a signal rather than on how fast you travel between signals. You don’t have to be a transportation engineer to figure out why. All you need is some primary school arithmetic skills.

This repeats itself signal after signal, and after a distance of 10 km you’re probably still abreast of each other. In reality, many of the busier traffic junctions may have a wait time of 3 minutes (180 seconds), and in heavy traffic you may have to wait for the light to turn green twice before you clear the junction. So the effect is even more.

I commute to work by bicycle. In an extreme example of the Schumi-Bang effect, I often keep abreast of a Schumi at every signal almost the whole distance from my office to my home. At peak traffic time it takes me 1 hour from home to office by car, and it takes me the same 1 hour on my cycle. At every signal the cars and motorbikes bikes reach before me and wait, and I eventually draw abreast of them.

The problem is not the speed between signals. It is the wait at the signals. The solution therefore is to reduce or eliminate waiting time at signals.

We have living proof of this in Bangalore.
Example 1:
Sankey Road between Golf Club and Mehkri Circle was notorious for traffic jams.
When Cauvery junction underpass was built, the problem disappeared. A month after this BBMP started widening Sankey Road between Golf Club and Windsor Manor, from two lanes to three lanes each way. Traffic signals at Windsor Manor and BDA junction were removed. Traffic from Bellary Road was diverted to Palace Road. During this construction phase the road adjoining golf course was actually reduced to one lane because of digging and debris. But guess what? There was no difference in traffic speed, even though the road was narrowed instead of widening.

Example 2:
Hosur Road beyond Silk Board was widened to 3 lanes. The traffic congestion should have disappeared, but it did not. Again because of the Shumi-Bang effect. Many stretches of the road are actually single lane because of the construction of the elevated road. When you drive down the road now, you are coasting along at a reasonable speed till you hit a traffic intersection. There’s a traffic pile-up at every intesection, and only at intersections. The problem again is not the road width, it is the intersections. 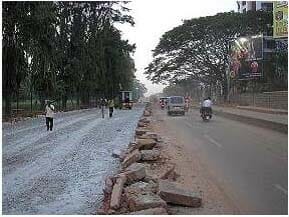 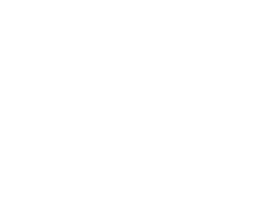 BBMP knows about the Schumi-Bang effect

In response to an RTI application dated May 22, 2008, the Assistant Executive Engineer, Special Cell for Subways, replied with these details:

30 km/hr, by the way, is a good speed for inner city travel by international standards. What we note is that this increase in speed was while Sankey Road was being widened, when the BDA junction was not yet ready, and traffic was being diverted through a narrow single-lane side road in Kumara Park.

The obvious conclusion is that removing the traffic intersection at the Cauvery theatre by building an underpass made the big difference, not road widening.

How do we avoid stops at intersections ?

Coordinated signals are a series of signals that work in such a way that vehicles can proceed through a continuous series of green lights.

Let’s now design a simple coordinated signal system for a 2 km long main road on which there are signals every 0.5 km and we want vehicles to travel at a speed of 30 kmph. Our main road has a single cross road at each signal. That’s three signals in all, plus the one at the start of the stretch.

Each set of signal lights has a simple controller that decides when the lights for the main and cross roads will turn red, amber or green. The lights at each signal are independent of the others, and you get a red light for 1.5 minutes. After you leave signal 1, in the worst case you reach each signal just as it turns red.

Total travel time: 4.5 minutes to get past signal 4.

To enable you to through all signals without stopping, each signal should turn green just as your vehicle reaches it. When you leave signal 1, you reach signal 2 after 0.5 minutes, signal 2 after 1 minute, etc. Which means signal 2, 3 and 4 should turn green 0.5, 1 and 1.5 minutes respectively after signal 1. To achieve this we just need a slightly more complex controlling system that is connected to all three signals and controls them according to pre-programmed logic.

This is a simplified case, and actual conditions on the road are more complex. That’s why, although you and I designed this basic coordinated system with our knowledge of primary school maths, we need experts to design the more complex ones.

In modern coordinated signal systems, it is possible to travel long distances without encountering a red light. Traffic lights are centrally controlled by monitors or by computers to allow them to be coordinated in real time to deal with changing traffic patterns. Video cameras, or sensors buried in the pavement can be used to monitor traffic patterns across a city. The cost of such systems is a tiny fraction of the cost of road widening.

We know what these are, and how they can help. Underpasses are of course preferable to overbridges in terms of aesthetics – there is no ugly concrete sticking up in the air.

Coordinated signals are the better solution, and must be used as the preferred option wherever possible. They require no extra construction and the resultant destruction of trees and buildings.

Then why are we destroying our city?

Sankey Road has now been widened. The stretch from the Windsor Manor bridge till Cauvery Circle remains unchanged, a two-lane road. When you come down from the Golf Club, at Windsor Manor the road is effecively single lane just before the bridge. If you drive down this stretch the next time you’ll see what I mean. The width of a road is actually the width at its narrowest part, so Sankey Road is effectively single lane.

A beautiful line of trees has been cut down on either side of the road, the High Point police station has been destroyed, the road has eaten into the golf course on one side and the properties on the other side. We’ve also similarly destroyed St. John’s Road in Koramangala and Bellary Road. All completely unnecessary.

The problem was not the road width, and the solution was not widening.

How come the city’s planners have not learnt from the Hosur Road experience?
How come you and I, who have no expertise in transportation engineering or town planning, can understand the Schumi-Bang effect but the people in charge of the city administration cannot ?
How come they never think of the intersections, and are hell bent on widening the roads?
How come they still cannot think beyond solutions like elevated roads going East-West, North-South and on Mysore Road, a repeat of the totally asinine elevated road to Electronic City ?
How come the ‘experts’ are thinking of increasing road space instead of improving the utilization of the existing road space?

Unless we think of solutions other than road widening? ⊕

These animations are highly simplified versions of actual roads, just to illustrate the concept.

About G V Dasarathi 6 Articles
The author has not yet added any personal or biographical info to her or his author profile.

A candle light vigil was held opposing LDA plans to handover Hebbal Lake to a private party that plans an upmarket recreational facility beside the lake.

Why are you charged extra sometimes, by BMTC? Why doesn’t the BMTC fare look scientific? Here’s the answer.

He’s the head of the Citizen Action Forum (CAF), an organisation of citizens and citizens associations who believe in offering solutions, not just pointing out the problem. Meet N S Mukunda.