Justice Santosh Hegde was the speaker of this year’s Beyond Carlton Memorial Lecture. Since its inception a few years ago, Swati Ramanathan – Co-founder Janagraha, R A Venkitachalam – MD Underwriters Laboratories, Rajeev Chandrasekhar – MP, and V Ravichandar – Civic Evangelist, have spoken on topics relating to urban and civic issues.

Justice Hegde spoke on “The need for social values in governance.” Quoting various examples from his tenure as Lokayukta of Karnataka, he talked about how corruption had spread in all branches of governance, be it the Legislature, the Executive or the Judiciary. He went on to talk about how the fourth estate too, namely the Media, had not been spared.

He mentioned how, in every area today – every department, every walk of life – one had to either pay or receive bribes. He talked about how greed and lack of humanism were causing tremendous pain to people and society. He added that the youth of today alone could do something productive change this.

Quoting Siddiah Puranik’s poem “Modalu manavanagu”, Justice Hegde concluded the talk by stating that, to change the society, one must inculcate the values of contentment and humanism.

The talk was followed by the demonstration of a working model of a low-cost fire extinguisher that was the invention of 13-year-old Jayakumar, a resident of Sivakasi. Jayakumar, a 9th standard student in a government school, accompanied by his Science teacher Karunaidoss, was interviewed by R A Venkitachalam (Venki), one of the executive council members of Beyond Carlton. 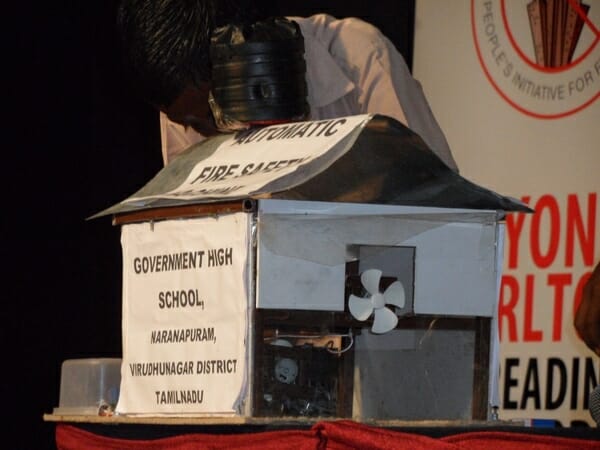 Jayakumar talked about how around 90-95% of people in his hometown of Sivakasi worked in cracker manufacturing units and how not much importance was being given to safety in these units. He mentioned that, as recent as a couple of days ago, fire in one of the units had claimed the lives of 10 people. Since most people’s livelihood was dependent on these units, they had to work in the existing conditions.

Jayakumar, whose mother is also a worker in one of the units, wanted to create a low-cost fire extinguisher that could be set up in the various firecracker units. This desire was encouraged by his science teacher. Following lot of research online and through other means, Jayakumar developed a model fire-extinguisher using items like exhaust fan, cooling fan, heat sensor, a danger LED bulb, resistors, relays, water sources and other easily available items. The model was demonstrated to the audience.

Talking about what next, Jayakumar shared that he wanted to work towards building a life-size working model and have it installed in as many units as possible. Venki added that this model was indeed a wonderful example of ‘Make in India’ and it did not matter where in India it was made – Bangalore or Sivakasi. Jayakumar was thereafter felicitated by Uday Vijayan, the Managing Trustee and President of Beyond Carlton. 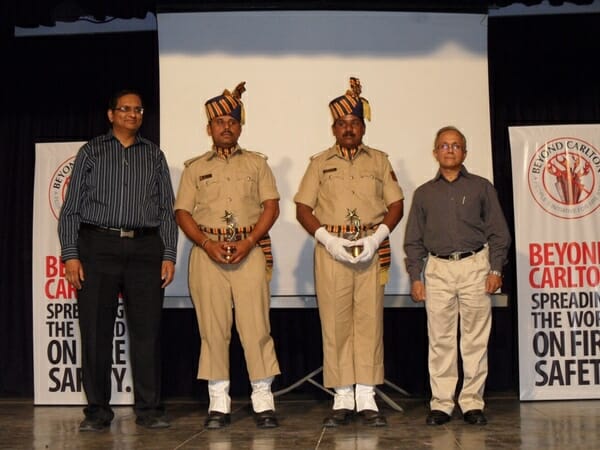 Following the interaction with Jayakumar, two firemen of Bangalore City were honoured by Beyond Carlton. They were:

Gopal Devanahalli spoke about the various areas in which Beyond Carlton had been involved in the past one year. He talked about India’s first mobile fire safety App, the Fire Champ Mobile App, that had been launched by them during 2015 in association with Janagraha and the Karnataka Fire & Emergency Services. He added that 12 issues reported through this app had been successfully addressed.

Taking about the Beyond Carlton’s reach, he mentioned that there was now a representative in Mumbai and a person was to soon take up the cause in New Delhi too. He further stated that Beyond Carlton was in the process of constituting an Advisory Board and that Justice Santosh Hegde had consented to be its first member.

Concluding his talk, Gopal mentioned the focus areas of Beyond Carlton would be the following:

The programme started and concluded with renditions by 29 girls from the Frank Anthony Public School Treble Choir under the guidance of V Narayanswami. Sumit Khanna, a member of Beyond Carlton’s executive council, proposed the Vote of Thanks. The function was compered by film-maker, Vlogger and Anchor, Lakshmi Rebecca who has been associated with Beyond Carlton since its inception.

From disruption of lake settlements which slumdwellers depend for livelihood to pollution and lack of sanitation, everything takes a toll on their health. Read more.

A champion for classical music in south-east Bangalore

Ranjani Fine Arts has grown to be a champion for classical music in south-east Bangalore. Their annual music festival, Samyoga, is coming up in 2 weeks.