Arundathi Rao is a 50-year-old woman who works with the social impact team in a technology firm. Last year, she made a deal with her colleague Ashwin, who was participating in a running event. For every kilometre he ran, she would contribute Rs 200 to the non-profit that the run was supporting. Over the course of 13 days in December 2014, Ashwin ran 175 km. True to her word, Arundathi ensured that she shelled out the amount.

This year, Arundathi is taking it up a notch by participating in the second edition of the very same event. The event named Mera Terah Run (mera – mine, terah – yours; also a play of the Hindi word for number 13), can be called an epic yatra to say the least.

The brainchild of Jagadish Damania, a 52-year-old long-distance runner, Mera Terah Run (MTR) is a running event where a team of runners will be running a half marathon, i.e., 13.1 miles or 21.12 km, every day for 13 days, in 13 towns/cities across India. Come December 17th, the first run of the event will be flagged off from Cubbon Park in Bengaluru. From then on until December 30th, the runners will traverse through Kanyakumari, Allepey, Kannur, Honnavar, Malwan, Chiplun, Alibaug, Dandi, Bhavnagar and Diu, before returning to Bengaluru.

Ask Jagadish how he thought up the idea for the run and he says, “I have participated in all eight editions of the Bangalore Ultra. I started with the 25 km category and in the last two editions, participated in the 24-hour category. Following that, I felt like I needed a new challenge. And that’s how the Mera Terah Run came about.” While the thought of running a half marathon every day seems a daunting task, what makes it worthwhile is the purpose it serves to meet. 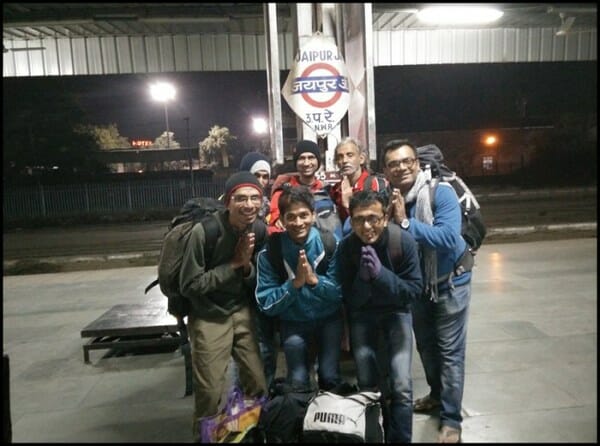 The yatris at the Jaipur railway station. Pic: meraterahrrrun.org

The format of the event is also a testimony to Jagadish’s love for train travel. The contingent will depart from Bengaluru to Kanyakumari by train, complete a half marathon at Kanyakumari and then catch a train once again to Allepey. Once they finish the run at Allepey, they will once again catch a train to Kannur, and so on and so forth.

Running to make a difference

Running and fundraising have been synonymous with each other around the globe. And this event is no different. Through the event, Jagadish and team are reaching out to the running community to raise funds for three NGOs Rejuvenate India Movement (RIM), a pan-India NGO which works towards sustainable development in rural areas, Sahyadri Nisarga Mitra which works on environmental conservation in the Sahyadris, and Shaishav an NGO in Bhavnagar, Gujarat, that works with children and youth. A page has been set up on Impact Guru to raise funds for these NGOs. If you would like to support the NGOs, follow this link: meraterahrrrun.org/donate. The fundraiser page will be live till end-January 2016.

Through the course of the events, runners will get to meet some of the people working with the NGOs as well. At the 2014 edition of MTR, volunteers from RIM supported the runners during the Chennai leg of the run. This year, RIM volunteers will be pitching in for the runs in Karnataka and Tamil Nadu. At two other stretches of the run, runners will have the opportunity to interact with the local volunteers from Sahyadri Nisarga Mitra and Shaishav, and understand what the money that is being raised will be utilised for.

Talking to past participants (some of whom are participating this year too), one gets a glimpse into the camaraderie that exists in the running community. They recount their experiences of the yatra with fond memories. Jagadish says, “Despite the Kochi leg of the run falling on a week-day, many folks from the local running community joined in for the run. Some of them sponsored our breakfast and lunch. Here and in some other cities, runners and friends of runners gave us refreshments; some offered us their homes to freshen up or even stay at.” 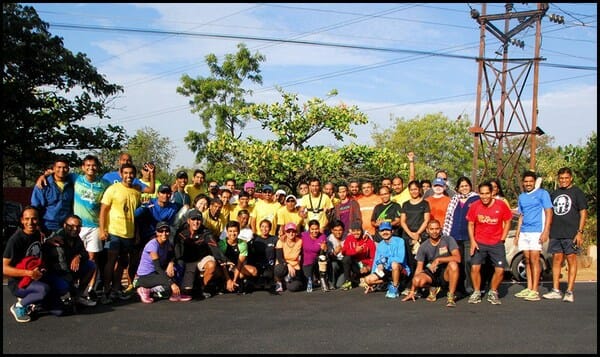 Members of the running community join in at Hyderabad. Pic: meraterahrrrun.org

Brijesh, another runner, talks about what happened at Delhi last year. The team’s train to Delhi was delayed because of fog. They were to be received at the railway station by the friend of a friend of one of the runners. When they finally reached Delhi, they found the friend waiting at the station with a car. He had in fact reached the station at 5.30 am, as per the train’s scheduled arrival time, and had waited for five hours at the station to receive them. He then took them along, made sure they had a place to freshen up and eat before they ran in Delhi.

At Jaipur, the host of the home stay where they were put up, gave them a discount on the booking after finding out what they were running for. A significant numbers of runners, joined in to run at the launch in Bengaluru.  Some folks from Bengaluru drove down to Chennai to cheer on the runners; some even ran with them.

The personal stories of the participants are interesting too.

Gurudev Nagaraj, an NRI residing in the US participated in the 2014 edition of the event. He came to India solely for the purpose of participating in the event and even contributed a sizeable chunk of money to RIM, which was the only partner NGO last year. He was travelling by train after 15 years!

Arundathi, who will be walking 13 km at each city at the current edition, was no runner last year. After her colleague introduced her to it, she not only graduated from being a walker to a jogger, but even managed to complete a 5 km run. And in the one year that she has begun running, she has lost 15 kilos! She says, “I love the concept. There is not much you can learn by sitting inside the four walls of your office cubicle. I am looking at this as a learning experience. There is so much to the event – you meet new people in new places. I wanted to put myself out there, and that’s exactly what I am doing.”

Brijesh says, “We typically participate in a running event to finish a particular distance, or do our personal best in terms of timing. But after a point, you want to do more. I am a frequent traveller, so the travel obviously appealed to me. Also, this will be my first charity run, so that’s exciting too.”

“The runners take care of each other”

A typical running event offers many comforts that make the running experience better – there are volunteers manning aid stations stocked with water and food, there are pacers who run on the side to encourage runners, and there is first-aid readily available should the need arise. 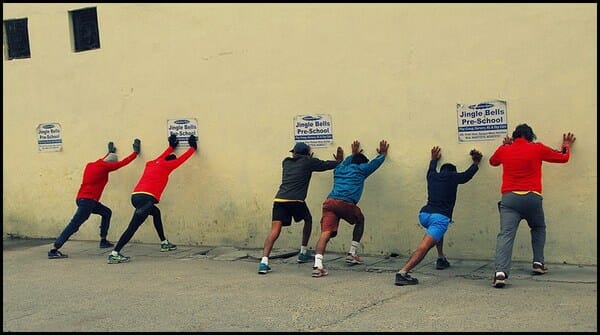 Stretching after a run. Pic: meraterahrrrun.org

Mera Terah Run is a different animal. While some runners will join the contingent at different stages of the run, the recovery from running a half marathon every day is something that is taken care of by the team themselves. Sindhu Naik, who is Jagadish’s wife, and manages operations for the event from Bengaluru says, “The runners take care of each other. The get the rest they need while they are travelling. They have a lot of fun on the way. There is a lot of camaraderie. And they are not pressed for time, since the aim is to only complete the distance every day, not achieve their personal best. And in the previous edition, they were administering first aid when the need arose, and even gave each other massages after they finished the run.”

Mera Terah Run flags off from Cubbon Park on the morning of December 17th. If you wish to, you can join the yatris, to cheer them on, and even run with them. You could perhaps even take some refreshments for them. Do remember, the run is one for charity, so do be generous and consider making a contribution to the three NGOs that Mera Terah Run is supporting.

Helping the homeless and needy in Bengaluru

He’s 22 and has already put in a good five years of social work. Meet wonder youngster Mansoor Chetlu, who has taken it upon himself to help destitutes in the city.

A weekend getaway for the eco-conscious

Basic amenities amidst nature’s luxury, just outside Bengaluru – four twenties something are trying to create a different kind of eco-stay.

Children aim for a better future