On 9 August, M  Karunanidhi, the Chief Minister (CM) of Tamil Nadu, unveiled the statue of Thiruvalluvar near Ulsoor Lake. Kalaignar, as he is popularly known, was at the RBANMS grounds when the statue was unveiled by remote control.  The yellow curtains opened and suddenly, magically the statue became visible to people from all four directions. There was a hush and it took a while for people to start clapping.

It was past 12:20 PM.  Kalaignar’s speech broadcasted over loudspeakers, talked of the need to build interstate brotherhood which was lavishly quoted from Sarvagna’s couplets.  He said publishing Kannada poet’s couplets or distributing it was never opposed in Tamil Nadu.  He said he had given a free hand to Yediyurappa to choose a place for Sarvagna’s statue in Chennai.  (The unveiling of Sarvagna’s  statue was later held on 13 August).  Karunanidhi added he wanted to visit his daughter at JP Nagar. 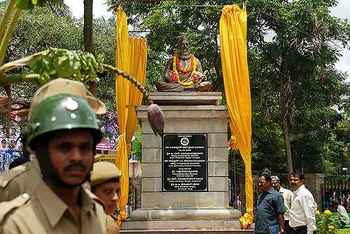 The visiting CM acknowledged a host of ministers present at the RBANMS ground – Roshan Baig, Katta Subramanya, P C Mohan and many Ministers from Tamil Nadu. The composer and poet Vairamuthu was present, I heard.  Famous Kannada poets and litterateurs were also present.

The police officials suddenly got into a huddle and posted themselves at the gate of the RBANM grounds, as we walked over there. The onlookers were pushed to the side walks and barricades were put up. There was a pregnant silence. As if on cue, people brought out their mobile phone cameras.   The police vans did a few rounds up and down and then came the motorcade.  Black Cat commandos were visible.  A few announced it was Kalaignar.  It was him indeed!

Kalaignar drove to take a look at the statue and retraced his path back. He lowered the car window only on the return journey from the statue. People shouted "Mudal Amaitchar Vazhaga (Long live the Chief Minister)". Chief Minister Yeddyurappa’s speech was well-planned and terse.

I heaved a sigh and looked around.  It was an incident free unveiling.

Most people had to walk about two to three kilometers to reach the venue, jostle with the crowd, watch the events from whatever vantage points they could manage, and then walk back to where they had come from. This activity was not effortless as most of them were above 40 years of age.

They were old enough to understand why the earlier planned unveiling* did not take place.  Many were not literate. Most had joined the ranks of the middle class recently.  They now had toilets inside their houses and their children went to school.  Some even had working wives.

A few could speak English as it is the curried language in and around Frazer Town and Cox Town.  Definitely the vast majority could not quote a single Kural in Tamil. On other days, these onlookers would have travelled to work passing Ulsoor Lake at some junction or other.  Some worked in the various offices, hotels or hospitals as peons, waiters, or ward boys. Some worked as delivery boys in courier offices; some in computer centres and in schools. Some owned xerox shops, foundries, or were hamalis (manual labourers) in Shivajinagar.

Some were Hindus and worshipped the tribal goddess Om Shakti.  Some belonged to the Ambedkar Sanghs. Some were converted Christians. Some had absented themselves from Church to be there that day. There was even a pastor.

There were retired employees from MEG (Madras Engineering Group is a regiment of the army’s engineering corps). After a sheltered life in the army, many find it difficult to fit back into civilian life. Some of these 60-plus year olds suffer from ill health. Sometimes they are rejected by their families. Some get drunk and spend their days in and around the statue.

But today, they had all spruced themselves up, and were waiting for the unveiling to take place.

Those who were part of an autorickshaw association, had their livelihood to defend.  Those who were members of the Bangalore Tamil Sangam had their badges to proclaim the purpose of their presence there. The cine fans association had their agenda spelt out.  Their banners spoke of their affiliations.

From Shivaji nagar to Ulsoor.  From Ramaswamy Palya to Sivan Chetty Gardens and Kamaraj Road Nala, every resident was there.

To all the other long time residents of that part of Bangalore, the lake, the temples, the music Sabhas, the wedding halls and eateries; the maternity hospitals and student hostels, were cardinal points in their lives; has been for generations.  Passing by the lake a hundred times a day during their various chores is a collective memory.

The Bangalore East Station has been a readily accessible to them to reach Madras (now called Chennai).  The Tamil magazines have kept them up to date about the pulse of their existence.

The Thiruvalluvar statue is the high point of their melting pot culture.  They could all relate to it.  Many came as couples, just like us.

The event was supposed to have taken place at 11 AM.  It took more than an hour to start.  During that one hour, the tension in the eyes and demeanour of the onlookers was palpable.
After the unveiling there was relief among people. Some ventured into animated conversation. Some appreciated the arrangements and said it was better this time then it had been 17 years ago. A bold few ate peanuts that were allowed to be sold in small quantities. There was silence and order when Kalaignar spoke.

The police allowed a boy to sell a bag of Dina Chudar newspaper. He sold it in eight minutes.

Having grown up in Basavangudi, I moved to this part of Bangalore (Banaswadi) after my marriage.  I have lived here for thirty years now.  For fourteen years, I used Kamaraj Road, to drop and pick up my children from school. The sights and sounds that define this place are etched in my memory.

My husband had grown up in the MEG Quarters where his father was employed.  He and his friends had fished and rowed the MEG boats with the elders.  They used to line up at the various neighbourhood temples for prasadam. After eating, they would compare the food offered in each temple.

He is now 57 years old and his health does not permit him to ride a two wheeler and to walk the few kilometers to Ulsoor lake.  But Govindaswamy had to go to the unveiling today.

In all the thirty years of my married life, today I felt a part of him in this decision. All the memorable days of our courtship and other outings are inextricably linked to the Ulsoor Lake.

We went to the venue in silence and walked back in silence just soaking in the atmosphere. We liked it. ⊕

References
*The statue was originally due to have been unveiled in the early nineties; the plan was stalled due to opposition from various groups. For more see here.

About Padma Govindaswamy 2 Articles
The author has not yet added any personal or biographical info to her or his author profile.

BMTC: A saga of no profit, hiked fares and troubled commuters

With no ideas to increase revenue, nothing to streamline schedules of buses, no plan to provide enough bus shelters, public transport in Bangalore has been trapped in its own web of mismanagement. Here is an open letter to BMTC MD, which reflects a commuters’ mindset.

‘WithBengaluru’ collective delivers over 11,000 ration kits to the poor, asks CM to solve the larger crisis

‘WithBengaluru’, a collective of individuals and organisations, has distributed over 11,000 ration kits to vulnerable people in Bengaluru during the lockdown. They have now asked the Chief Minister to take a specific set of measures, so as to tackle the food crisis.