A lane full of huge idols wrapped in polythene sheets ready to be painted, several tents full of colourful big and small idols to be sold, painters using spraying machines to fill vibrant colours on small mud idols and children curiously looking at which one to chose from, a sight of all this and we know that Ganesh Chaturthi is on its way.

Ganesh Chaturthi, also known as Vinayaki Chaturthi or Vinayaka Chavithi is celebrated as the birthday of the elephant god. The festival is observed in the Hindu calendar month of Bhaadrapada starting on the fourth day of the waxing moon period. Typically, the day usually falls between 20 August and 15 September. The festival lasts for 10 days, ending on Ananth Chaturdashi.

As I walk past the huge white Plaster of Paris idols on either side into a small lane in Pottery Town, near Chinnapa Garden (Bangalore East), leading to a less lighted small room we see Sarvana and Komadi, a middle-aged couple, busy putting moist soil into moulds. They have been doing this work since generations. The small 10*10 feet room is lined with several similar small sized Ganesha idols on the side and in between is a heap of soil. 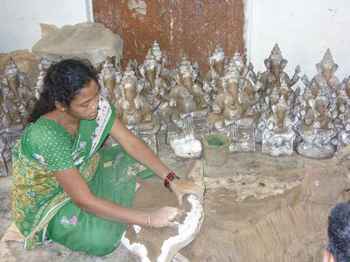 As Sarvana takes out bits of soil from the heap to arrange in the mould he says that it took him almost five months to complete 1000 small size idols. Sarvana makes only small size 2*1 inch idols from mud; he does not use Plaster of Paris. Wholesalers from all over the city buy idols from Sarvana. He has priced his unpainted idols at Rs.50 and once painted he would sell them at Rs.100 each.

Sarvana who sits in that room throughout the day with his wife and elder brother, says that it takes him not more than 20 minutes to make one idol and then all the idols are kept to dry. Sitting in between the idols, Sarvana says, “The market for Ganesha idols is not a predictable one. Sometimes all the idols are sold in two days and sometimes none over weeks.”

Allah Baksh, in his early forties, an electrician by profession works at the wholesale market at Pottery Town during the festive season. “I am working here for more than 30 years now,” he says. Baksh proudly shows the variety of idols on display inside the tent where he has done electric work and takes care of the place throughout the day. He explains the entire journey from the soil transportation to the final touches of the idols. He describes how Chikni Mitti (smooth soil) is picked up from lakesides and transported to the Kumbhars (the artisans who make pottery). “It costs Rs.2000 for each bullock cart full of soil and the artisans specially come from Kolhapur (in Maharashtra) and Tamil Nadu,” he adds.

As we walk around the tent admiring the colourful idols, Baksh points out to the biggest idol in his tent, a seven feet tall Ganesha and says, “This one costs Rs.15,000.”  The cost of a small idol starts from Rs.125. Each festive season he sells around 25 to 30 big idols, the number he says sometimes even reaches 50. “But this year it seems to be slow, not many people have come up and booked the idols,” he says. For small idols the selling time is usually starts a few days before the festival.

Ganesh Chaturthi is celebrated throughout the country. “Historically, the people of Bangalore have always celebrated the Gauri festival, which falls one day prior to Ganesh Chaturthi. The trend for celebrating Ganesh Chaturthi – colourfully decorated pandals, cultural programmes and more – is a very recent one in Bengaluru. It emerged during the last 30 years and has since become popular”, says Dr A Sundaram, city-based historian and expert who has studied the origin and evolution of Ganesha.

Praying and celebrating the festival was mostly concentrated to Western India (Maharashtra, Konkan, Karnataka and some parts of Kerala too), says Dr S K Aruni, Assistant Director, Indian Council of Historical Research, Bangalore. “This celebration is said to be first started by Bal Gangadhar Tilak and he used this public forum to propagate his ideas. Slowly, this festival gained a lot of popularity and it was celebrated throughout the country and not just Western India”, says Aruni.

“It is also a way by which people come together,” says Pushpa Rao, a housewife in her late 40s, and resident of N S Palya, near Mico Layout in BTM Layout II Stage in south Bangalore. Pushpa has been living in this area for more than seven years and is witness to the Ganesh Chaturthi celebrations in her area. People of N S Palya organise this festival at a devasthana (a temple area) by erecting a big Ganesha idol and arranging cultural programmes for two – three days. “This is the only time when I see everybody coming here and enjoying with so much energy. Otherwise nobody has time for anyone,” she adds.

The practice of community celebration is also seen at the popular vegetable market in Jayanagar 4th block. All the vegetable vendors organise a big Ganesh idol and some cultural programmes for two days.  Muniraju D, a vegetable vendor at the market says, “An idol is erected next to the shopping complex and we collect funds from all the shops around for the idol. We all decorate the pandal ourselves and we all enjoy doing this.” He further adds that they used to make theme based decorations earlier but now they hardly get time.

Apart from community pandals, Nammura Hotel, situated in JP Nagar II phase organises Ganesh Chaturthi in its neighbourhood for the public. “We have been doing this ritual since the time Nammura was formed, from the last 6 years,” explains Ashwini V Rao, secretary to the CEO of Nammura Hotel. She further adds that there is a range of sweets and confectionaries prepared for this occasion and stalls are put up for people to buy delicacies. “There is modakam, steam Kadbu, fried Kadbu, Chaklis and we also have special menu for the three days of the festival including special rice delicacies, sambhar and so on, adds Ashwini.

Entry points to various lakes for immersion of idols

Another interesting fact is that Nammura prepares its own Gauri-Ganapati idols each year. “We have our own potter who comes from KG Halli and prepares idols,” explains Ashwini. The idol preparation starts almost 15 days prior to the festival. “The year before last we had made idols out of cereals. Our decoration is usually done of vegetables. Even this year we will have vegetables and fruits decoration with the idols. And we make sure that the idols are eco-friendly,” she adds. Nammura does not sell the idols; they simply use it for their own celebration.

While in celebration mood we tend to forget that there are rules and regulations also to be followed. K P Deepak, Police Inspector, JP Nagar says that it is mandatory for any association to get permission from the local police for any kind of festival pandal. At the same time they need to get permissions from Karnataka Electricity Board and the fire department.

Deepak further mentions, “In some pandals people have an overnight lamp near the idol, it is recommended that at least one representative of the association stay there so that any case of emergency or fire can be taken care of.”He adds, “No pandal is supposed to play music on loudspeakers or use mikes from 10 pm to 6 am. They are not supposed to trouble the public or vehicular traffic.”
The JP Nagar police station itself got more than 20 applications last year, but there were more pandals than that. “Not everyone bothers to take permissions from the police or the fire department before setting up a pandal. Some people are so reluctant that they don’t even bother to look at the rules and regulations,” explains Deepak.

What about enforcement? Deepak says that if the police identify pandals without permission, they seal the place, stop all the festivities, and mikes and loudspeakers are seized. “And a case is filed against the association. During the Ganapati festival depending on the applications we appoint two policemen in every area to keep a watch on law and order”, he notes.

As always, the enforcement is soft. “But we have noticed that only big associations take permissions. Small pandals never bother to take permissions. And we cannot go and close down all the small pandals present,” says Deepak. Staff at the police station confirm this about the past. They say that at least four to five cases are filed each year, and all these are against the big pandals. Small unlicensed pandals are rarely caught.

The festivities do not end with erecting an idol in a pandal and having cultural activities. On the last day, that is on Ananth Chaturdashi, Ganapati idol is taken through the streets in a procession accompanied with dancing, singing, and fanfare to be immersed in a river, lake or the sea symbolising a ritual ‘see-off’ of the elephant god in his journey towards his abode in Kailash while taking away with him the misfortunes of his devotees. After the final offering of coconuts, flowers and camphor is made, people carry the statue to the river to immerse it.
Therefore on one hand where the police get busy maintaining law and order, the Bruhat Bengaluru Mahanagara Palike also formulates rules and regulations for immersion of idols.

Dr S S Khandre, Public Relations Officer, BBMP says that the rules pertaining to immersion will be the same as that of last year. “We have not yet had any meeting with the respective officers to figure out if there will be any change in the plan. If any special arrangements are required we will do it.  Special security measure will also be taken in coordination with the Police department.  The traffic management will be done in coordination with the traffic police,” he explains.

Last year there were more than 30 mobile tanks for idol immersion put up throughout the city. Khandre mentions that this year also those tanks will be functional and some more might be introduced. On the lake spots where immersion will take place BBMP will arrange expert swimmers and the public need not have to enter the water. “People should hand over the idols to the swimmers,” adds Khandre.

Last year the BBMP had built special enclosures of about 40 feet by 40 feet at Yediyur Lake, Ulsoor Lake and Sankey Tank for immersion of Ganesha idols.  Each of the tanks was surrounded by barricades and had shelters, beyond which people were not allowed. There was a container for disposal of garlands.

It is celebration time for everyone in the city. As BBMP and police roll up their sleeves, citizens have their tasks and responsibilities cut out in enjoying the upcoming festive season.

About Supriya Khandekar 66 Articles
The author has not yet added any personal or biographical info to her or his author profile.

After four years of wait, citizen gets a verdict of hope

The episode serves an important lesson for people active in civic space: never give up.

The stage is set for a new Bengaluru with three municipalities. How did the process take place? What did the committee that was supposed to restructure Bengaluru say in its report?

Citizens speak out on the government-run composting plant in HSR Layout – what is happening, why people are worried about it.