We all crib about civic services, about crazy traffic, unscheduled power cuts, and a dozen other things which characterise life in namma Bengaluru . How about some humour and diversion for a change, trying to look at the same issues from another angle, to keep our blood pressure under control?

Traffic snarls, for one. Yes, it is maddening when one is stuck in endless jams at each signal, and it takes two hours to cover 15 kilometres. How about playing a game with yourself while you wait – try to guess how many vehicles will jump the signal before it turns orange. (Forget about green, if you wait for the green – the vehicles behind you will ram into you, because you are expected to move as soon as the orange comes on.)

If the number of vehicles that jump  the light exceed ten, then you will not have an argument with your spouse for the next 48 hours (or fill in whatever you want, as your pet wish). While you play this game with yourself, you get diverted, the time passes more easily – and you needn’t pop that pill for hypertension…

Here is another – while I was trying to cross the road at the busy intersection facing Jayanagar shopping complex at 9.05 AM on a Saturday morning, a police cheetah vehicle (No. 6082) jumped the red light and whizzed past, towards 10th Main. I have this habit of noting vehicle numbers and time, and sending complaints to the police station.

* Were they chasing a robber perhaps? Not really, the overhead light or siren were not on, like one sees on TV movies.
* Was the driver perhaps colour blind and hadn’t had his eyes checked? I presume a police recruit is given a physical check-up before he gets his employment letter.
* Or perhaps the vehicle’s brakes failed? (Will a private vehicle trotting out that excuse get away without a fine?)

C’mon Bengalureans, as they say on the FM channels, the most innovative answer gets a certificate that’ll entitle him or her to lifelong immunity from police chalans… 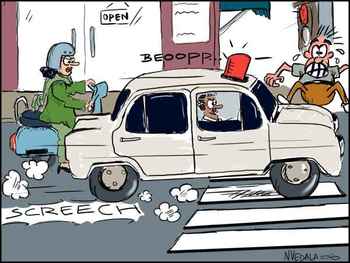 Another time, it was the police again – my diary entries say on March 4, at 8.40 AM, at the traffic intersection facing Jayanagar shopping complex again (I have this habit  of hovering around this intersection counting traffic violations as a time-pass hobby, you see). A white police car, no. KA02 G 900, with a red light on the roof, stopped bang across the pedestrian crossing, so that pedestrians had to skirt  around to get across.

* Should I have repeated that lecture to the police driver too? Or kept quiet, because one is supposed to “respect the law” and law-enforcers?

* Should I have penned a complaint and sent it to the commissioner, spending money on postage?

* Should I look up the statute books and check whether police vehicles are exempted from traffic rules?

* Should I have begun a signature campaign in the area to petition the local ACP for “protection against police vehicles”?

Share your options, and a surprise gift awaits the winner drawn by lottery.

Since we are on the subject of policing, just one more case – on  February 17, 2009, at 5.30 PM, a policeman riding a two wheeler came along the wrong side of a road divider on 27th Cross, opposite Nilgiris store, endangering oncoming traffic. He didn’t bat an eyelid as he rode towards the signal and proceeded towards 11th main. Let’s turn this into a whodunit –

* Why was he riding on the wrong side of the divider? Was he perhaps groggy after a long double shift on duty?

* Is there perhaps a secret rule that says police vehicles are authorised to disregard road dividers?

* Is this a lesson for the public, to say one has to be wary of not just road humps and stray cattle and dogs, but also policemen riding towards you?

* Was the poor man hurrying towards the public toilet that stands across the road divider? A case of a bad tummy perhaps? Tch, tch… make way, here comes a law enforcer in a hurry to empty his runny bowels. Except that he didn’t stop at the toilet, he went straight past.

* Perhaps he is a good husband and shares the housework with his wife, and while putting the cooker on that morning, forgot to switch off the stove, and after remembering it, was hurrying home to turn it off. If he had to observe traffic rules, you see, he would have to go riding all the way towards Nanda and take a U turn before he can come back to the complex signal, and that would have meant wasting three precious minutes.

If you cannot beat them, the saying goes, join them. There is a third option, especially in the context of the hassles that life in Bengaluru  includes – if you can’t do anything, learn to turn it into a guessing game, that way you at least save on blood pressure medication.

As COVID cases rise in Bengaluru, the dilemma is between ensuring citizens’ safety and opening up the economy. Redesigning our public spaces may be the best way to ensure both these.

BBMP compiling list of bars is a rude joke on Bengaluru!

Fire safety needs to be ensured by design and any violation must be noticed by the system by default. But why aren’t we there yet?

Saving trees by transplanting: BMRCL’s approach has some lessons for Bengaluru

New saplings planted after cutting a fully grown tree will not compensate for the lost greenery easily. Transplantation is an option many environmentalists are looking at, to help retain the trees. What are the merits of tree transplantation?