BBMP workers had dredged out the storm water drain near my house, and left a mound of filth, muck, crushed plastic cups and assorted debris on the edge of the pavement on  8-F main road, Jayanagar. Each time it rained, some of the muck got washed right back into the drain. It was an eyesore and an olfactory assault. There are posh shops all along this road, hundreds of citizens walk or drive past, even park next to the pile of rubbish. The famous Jayanagar shopping complex is just across the road.I complained about it to the city corporation and wrote to the local health officer. Nothing happened.

Returning from a trip to Boston, I was impressed by the arrangement at the Bangalore International Airport for screening passengers with H1N1 infection. 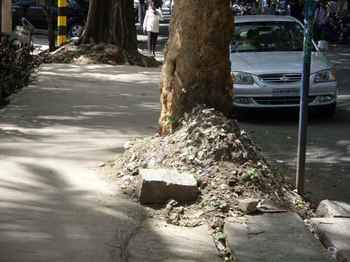 A series of desks had been set up, with medical personnel measuring each arriving passenger’s temperature.

We were all required to fill up a new form on health related information. The staff were all wearing face masks, and the procedure was quick.Two hours later, as I entered my home in south Bangalore, I noticed the pile of garbage still lying along the pavement outside my door. I then sat at the phone and called the BBMP control room number (Ph: 22100031)  who told me to call the south control room  (Ph: 26566362), then again the particular officer (Ramachandra, Health Inspector, Ph: 9480683977). I was then directed to the south zone office (Ph: 22975750), and then finally the local supervisor (Santosh, 9916327171). A youngish inspector came in a while and informed me that I should call Muralidhar, Senior Health Inspector (Ph: 9480683952).
This was becoming a farce…

Another employee, elderly, in Khaki uniform, turned up because of all the noise I was making, and declared he was the “supervisor in charge of the area” and promised that the muck would be cleared on Sunday.

No one came on Sunday (or subsequent two Sundays) I wrote to the new commissioner, Bharat Lal Meena, regarding uncleared garbage causing health hazards. I didn’t get an acknowledgement. 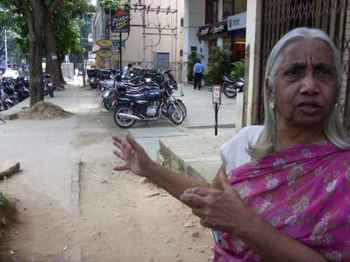 I came down with a bad viral fever (diagnosed now as chikungunya), was bed ridden for a week, lost two weeks’ productive work, my daughter had to cancel her trip to Kolkata for a conference, to look after me as I could not move, my joints were paralysed.

I then sent a letter to the Health Officer of Jayanagar (Ward No.60). Till date that mound of garbage is staring at my face.
~~~
Leaving a pile of stinking rubbish is a health hazard. H1N1 affects a small number of people who have travelled abroad, and about thirty odd cases have been recorded in the city till now. Rotting garbage can endanger the health of thousands who pass this way daily.
So why isn’t the state and civic administration bothered about the threat to the larger number, while it is able to quickly, put in place enough staff at the airport to check incoming passengers for swine flu?

Why? And why is it that more of us are not asking why? If only a hundred, out of the thousands who pass by, raised their voices and demanded an explanation about why such filth remains untouched, wouldn’t the city get better? Is it apathy, cynicism or philosophical detachment? Or pragmatic aloofness, knowing that this is how the city administration functions?

Bengaluru’s own public transport system, BMTC has plans to launch many progressive steps to ensure commuter safety and user-friendliness. BMTC Managing Director Ekroop Caur explains the plans in an interview.

From being a person who had to face societal opposition, to the one who gets Rajyotsava award for her activism, she has come a long way. Here’s an interview that throws light into Akkai Padmashali’s life and thoughts.

STP mess partly due to our lack of clarity: KSPCB chief

KSPCB Chairman A S Sadashivaiah talks about STP issues in Bengaluru, especially those in apartments and layouts. With the release of the new STP guide, he says there will more inspections now.