Traditional board games in India have been a major source of entertainment for many generations now. Even though still popular in some parts of the country, games of this kind are soon losing out to computer games and electronic gadgets among the urban middle class.

In an attempt of reviving these traditional games, Kavade, a toy store based in Seshadripuram, organised a traditional board games tournament on the 25th and 26th of July, 2009.

Sreeranjini GS, an ardent lover of traditional games, had founded Kavade earlier this year. Kavade houses a collection of eco friendly toys, gifts and puzzles. The store has a collection of handmade articles by artisans from various places in the country such as Chennai, Chennapatna and Kanyakumari.

The tournament included games such as Chowkabara, Pagade, AduHuli Aata and Alugulimane. Divided into two age groups, above and below 15 years, this event attracted more than 60 participants in two days. The participants enjoyed playing together with friends and family.

Sreeranjini opines that games like these help children play with other children and bond with their family as well. She says children today have adopted computerised games and television as their main source of entertainment. Hence, many are clueless about these traditional games and alternate means of fun and often get very restless and bored during power failures, she adds.

Adu Huli Aata (Tiger & Goat game):  Known for developing strategy and team work, this game is a hunting game played by two players. One player controls three tigers while the other controls the flock of fifteen goats. The game ends when either tiger takes out more than six goats or the goats manage to immobilise all tigers.

CHOWKA BARA (ASHTA CHEMMA in Telugu; DAAYAM in tamil) is a ‘Race Game’ where in two to four players race their respective pawns on a board of 25  squares to reach the inner most square. The game board is played on a square board.

ALUGULIMANE (PALLANGULI in Tamil; MANCALA in Hindi): A good game for two to sharpen counting skills and improve mental calculation. Making a quick estimate of the beads and judging the number of pockets to be filled requires one to be very attentive.

PAGADE (DAYAKATTAM in Tamil; CHAUPAD/PACHISI in Hindi, otherwise called Ludo) is a ‘Race Game’ where in two to four players race their respective pawns to reach the inner most square. The game board has four arms joined at the sides of a central big square which is ‘home’. Each arm is made up of three rows of eight squares. The great Indian epic, Mahabharata has reference to this game being played between Pandavas and Kauravas.

An exuberant mix of playfulness and competition was seen among the participants. The registration fee was Rs 50, which was inclusive of one game. Every extra game costed Rs 25. The participants could take part in all the games with a blanket fee of Rs 100.

Dr. V Balambal, former Professor of History at the University of Madras distributed the prizes. Balambal is a board game enthusiast and has authored books on them. For all those who have never played these games before, the volunteers at Kavade provided guidance about the rules of the games.

Many parents said that they have grown up playing such games and the event gave them a chance to introduce their children to it. One such parent, Mohan Joshi felt that people today rarely keep these games at home. He added  that tournaments like such help children develop patience in their otherwise fast paced life. He said his son Rohit, all of nine years, seemed to have developed a liking toward these games after trying his hand at alugulimane. “It helps children apply their mind unlike the aimless video games, thereby improving the thought process”, he said.

The tournament saw practised board gamers and first timers. Completely engrossed in chowkabari were two such novice youngsters Narahari and Murari who participated on both the days of the event. The boys who learnt chowkabari on the first day were quite competent on day two. Narahari considered these games as a source of bringing families closer together and bridging gap. Murari infact found board games such as chowkabara better than video games. They plan to come here more often.

Not only do these traditional games stimulate the mind and teach patience but are also inexpensive and completely environment friendly. They are safer than plastic toys and ideal for group play. They can be played using simple pawns such as shells and golis (kanche). 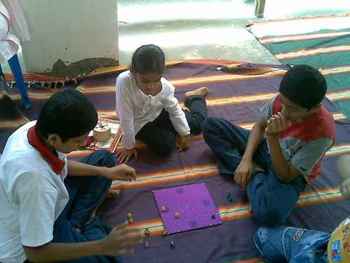 Kavade is associated with K4, a self help organization of about 50 women from villages of Kanya Kumari, which is evolving as a craft community working with palm leaf and other natural materials. Kavade strives to promote traditional, value enriched learning through eco-friendly games.

Kavade’s tournament was a gentle reminder that we could loosen up a bit sometimes in daily lives, enjoy the simple yet ever enjoyable traditional games with the entire family and bring back the warmth of yester years.

Be a part of this culinary monument where Dosa is not a dish but a delicacy!