Z A Khan, an engineer living in a Cantonment neighbourhood, does not travel by bus, car or two-wheeler to his office in Electronic City. He takes the Salem Passenger. “I take the train from Bangalore East at about 7:42 AM and get off at Heelalige (close to Chandapura) which is about 7 km from Electronic city. My company van picks me up at the station,” he says. Khan catches the same train back home in the evening at about 5:30 PM. “This is a much more convenient way to travel compared to enduring the ride through the city and traffic clogged Hosur Road,” he adds. A monthly pass on this line costs him Rs. 117 while it is Rs. 7 for a one-way commute.

Khan is among a small number of people in the city who commute on Passenger trains to the outskirts of Bangalore. Though the city does not have Commuter Rail Services (CRS), some commuters like Khan, who work on the outskirts of the city, use Passenger trains as it reduces their travel time. Though a large population in the city travels to industrial areas like Peenya, Bidadi, Electronic City and so on, commuter rail is yet to make a debut in Bangalore. 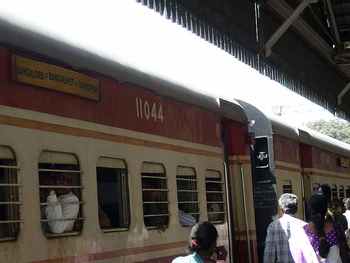 CRS is a state government subject, says Akhil Agarwal, Divisional Railway Manager (DRM), South Western Railways (SWR). “We (Railways) are for long distance trains. CRS is for traveling within the city. This is under state government jurisdiction”. Citizen Matters spoke to officials in the state government’s Infrastructure Development Department (IDD) who say “the Indian Railways (IR) do not do CRS because they feel it’ll be a loss like in Bombay. We wrote a letter to the SWR in February 2009 offering to fund the cost of two rakes. One for Yeshwanthpur to Electronic City, via Hebbal, Lingarajapuram and Byappanahalli. And another from Bangalore City to Devanahalli, via Cantonment, Channasandra and Yelahanka”. The official explains, on the condition of anonymity, that the cost of each rake is Rs. 4.76 crores and that the IR asked them for Rs. 9.5 crores, for two rakes. “We wrote a letter saying they should start the work within a week of their acceptance. IR is yet to respond”, adds the official.

Agarwal confirms receipt of the letter. “About three-four months back we got a letter. They wanted to fund the cost of the rakes. I have forwarded the letter to our office in Hubli. They will send it to the Ministry of Railways”, he says. Responding to whether the Railways approached the IDD for funds, he says, “This is an interactive process. We had written to our Hubli office for funding of rakes. The IDD offered to fund this”. I don’t remember the exact cost mentioned in the letter from the IDD, he adds. On whether the Hubli office forwarded the letter to the Centre, Agarwal says he would have to check with them but is sure that they would’ve sent it. Officials in the IDD say that the IR is willing to introduce CRS with state government funding. “It will be a loss for us. But we are ready to give money to buy the rake. It is good for social improvement”, says the official.

In the IDD’s website the budgetary allocations to the department for the year 2007-2008 includes Rs. 10 crores for CRS for Bangalore. Principal Secretary of the IDD, V Madhu, says this money is for initial studies and that he would be able to give concrete responses after a week.

CRS has been under discussion for more than a decade now. Many individuals and citizen groups have suggested introducing CRS in Bengaluru. In June this year, the Infrastructure Committee of the Bangalore Chamber of Industry and Commerce (BCIC) sent a memorandum to the Minister of State for Railways K H Muniyappa. This included suggestions to introduce CRS. N Mukund, member, Infrastructure Committee, BCIC says they suggested introducing DEMU (Diesel Electro Motive Unit) Services between Electronic City-Yeshwanthpur and Hosur-Bidadi-Jeevanahalli-Byappanahalli, both in the morning and evening.

“This will greatly benefit employees traveling from and to these destinations as it would reduce travel time and help ease traffic with collateral benefits to the city”, he explains. The memorandum also says there should be a commuter rail system from Devanahalli-Yeshwanthpur-Chandapur (via Electronic city) to help employees traveling to industrial areas of Peenya, Electronic City and Bommasandra. They also suggested providing train services at convenient times between Bangalore International Airport and Bangalore City via Yeshwanthpur-Yelehanka with a platform and ticketing facility at the BIAL flyover as it would help further improve connectivity to the Airport and parts of the city.

Mukund, also a former member of the Divisional Railway Users’ Consultative Committee (DRUCC), says, “At a DRUCC meeting they said if the state government is willing to take up the project, the Railways will do a feasibility report”, he says. The DRUCC is a committee established by the Government to secure better representation of railway users and providing more frequent opportunities for consultation between Railway Administrations and users on matters relating to railway services.

Mukund opines that the Agenda for Bangalore Infrastructure Development (ABIDe) Committee set up by the Chief Minister of Karnataka should look into CRS. Incidentally, the ABIDe report on Road Traffic Management & Transportation (RTMT), authored by Prof Ashwin Mahesh and R K Misra of the ABIDe committee, does not mention anything about CRS. The report only mentions “exploring rail connectivity to the airport along existing SW Railway track on Chikballapur route. Hourly service on this route from the major stations within the city (City, cantonment, KR Puram, Whitefield) can be established using existing SW Railway lines”.

Devesh Agarwal, another member of the BCIC’s Infrastructure Committee, says, CRS requires people to leave at a pre-determined time, “There will be a pattern. In Bangalore it is suited for industrial areas”. Agarwal says they suggested that there should be a train leaving Hosur at 7 AM and arrive at Ramnagaram at 9:30 AM and similarly from Ramnagaram to Hosur (through City, Cantonment, Byappanahalli).

The biggest problem of the Railways is that they are completely choked, he says. The DRM reiterates this point saying that it is easier for them to introduce trains in the middle of the day since most long-distance trains arrive/depart in the mornings and late evenings. “We have received demands for trains to Bidadi and Hosur”, Akhil Agarwal says.

Devesh Agarwal says, “Fifty per cent of the traffic on Hosur Road can be reduced if we have CRS”, he explains, adding that the infrastructure (in the form of tracks and stations) exists in Bangalore. “The thinking is what is not there”.

In 2007, the Rail India Technical and Economic Society (RITES), a Government of India enterprise, brought out a Comprehensive Traffic and Transportation Plan (CTTP) for Bangalore. The report states that “Major developments have been proposed in the suburban towns of Bangalore by BMRDA in the BMR. This is likely to increase interaction between Bangalore and these suburban towns. There will be need to provide commuter rail services to these towns from Bangalore”. It also says that the commuter rail system should be extended up to BMRDA’s new townships and beyond to act as sub-urban services. The CTTP proposes the following routes for CRS:

Pranav Jha, a founding member of www.praja.in, refers to the CTTP proposal, saying there has been no clarity from the government after this. “Railways say state government will have to do and state government says Railways”, he retorts, explaining that neither Railways nor the state may think CRS to be a viable project. But Pranav Jha adds that CRS will use existing tracks, therefore requiring low investment and quick returns, provided plans are made to look at how people will get to the stations from their homes and offices since trains do not drop you at your doorstep.

For this, Devesh Agarwal of BCIC suggests that BMTC buses can be introduced specifically for these areas and concepts like share taxis (like in Mumbai) could be looked at. He adds that even companies like Toyota are interested in CRS. “Toyota in Bidadi has offered to provide the last link from the Bidadi station”. But he adds that he does see some traction in this regard within the next six months to one year. Mukund says it is sad that the Railway Budget did not include CRS to connect industrial towns near Bangalore while Kolkata Metro was given a lion’s share. He says there should be a separate Rail Secretariat for Metro, Mono and Commuter Rail. There should be integrated connectivity between CRS, Metro and Road transport, he adds.

Passenger trains double up as locals

Even as discussions and debates on CRS continue, for those who do use the rail for commute, it is hassle-free. K Ponappa Subbaiah, a resident of Richard’s Town, takes the Bangarpet Express at 7:20 AM every Saturday from Bangalore East to Whitefield where he teaches photography in a college. “I find it really convenient and a hassle-free alternative to going by road. I see many people taking this train to their places of work in Whitefield or KR Puram.”

Why did BBMP and Urban Development Department apologise to Green court?

Karnataka government and BBMP say sorry to NGT for being presumptive about NGT’s authority. But what about the conclusion – is the buffer zone rule applicable retrospectively? Should building sanctions – those given recently or are in progress, in the new buffer zone regulations be cancelled? The confusion has only increased.

“Everybody wants a young representative. It is time for change.”

Krishna Byregowda says he is young and experienced. With two terms as an MLA, this 36 year old now aims to win against the incumbent, four term MP, BJP’s Ananth Kumar.

Bommanahalli: It’s going to be a tough electoral fight

Though Bommanahalli MLA is approachable, he did little to solve the problems, say residents. The urbane Ashwin Mahesh and Congress loyalist Nagabhooshana Reddy are taking him on this time.