Navakarnataka Publications was established in 1960 and has as its motto: Pustakada Muulaka Manukulada Seve (Service to Mankind through books). In its nearly 50 years of operation, Navakarnataka has published more than 2500 different books that cater to a wide range of people – from intellectuals to the common man. In addition to a monthly newsletter titled ‘Hosathu’, Navakarnataka has been publishing books (predominantly in Kannada along with a few English and Hindi books too) on varied topics including fiction, travel, drama, education, research, mathematics and science, general knowledge, history, personality development, health, wildlife, cooking, farming, consumer awareness and yoga to name a few.

The ten books are aimed at making the reader aware of the various trails and tribulations a woman undergoes in India. These books, all in Kannada, include novels, real life events and autobiographies. They are either original works or translations of works from other Indian languages.

The nearly three hour long function attended by around 150 people, commenced with a song recital by Abhimanyu. The function saw B K Sumathi (who has authored various books in Kannada) conducting the entire programme in Kannada – right from welcoming the people gathered to narrating in brief, stories / contents of each of the books being released, and introducing the authors / writers and other guests. 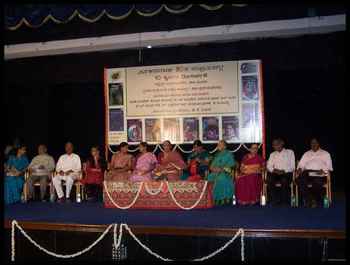 The ten books were released as a part of the series aimed at making the reader aware of the various trails and tribulations a woman undergoes in India.

In his welcome speech, R S Rajaram, Navakarnataka Publications’ Managing Director, stated that Navakarnataka had intentionally chosen to publish a series of books that were specific to women as a part of its golden jubilee celebrations.

One of the authors, G S Jayadev, a social worker who has been associated with Shakthidhama, a home for rehabilitation of destitute women spoke about the reasons that prompted him to write Shakthidhamada Sathya Kathegalu. He said the book reflects the atrocities committed against women, even today in this age of modernisation. He mentioned that the driving force behind his writings was his intention that his readers start thinking deeply about the various problems women in today’s India face and hopefully do something positive about it.

Miss Sampath, who has translated over 50 Telegu novels and 100 short stories into Kannada and whose Ushodaya was initially written in Telugu by Volga talked about the misconception that people generally had about translation work and people who do it. She says the perception is that translation work is easy and can be done by anyone. Countering this, she mentioned that translating a work actually needed a person who was well conversant with multiple languages and who could quite literally get into the author’s shoes so that the message or the soul of the matter in the original work do not get lost during translation.

Addressing the gathering, Dr. Preethi Shubhchandra, a writer, spoke about the pro-woman movement that has been taking place in India these past few centuries (right from Manu kaala till today, with reference to women in India including Akka Mahadevi). She also spoke about the various atrocities that are still committed against women, be it in cities or villages. The function concluded with vote-of-thanks by A R Udupa of Navakarnataka.

The Kannada reading public became richer by 10 books. Navakarnataka can be contacted on (080) 22203580 for more information.⊕

How shopping streets can be COVID-safe during Dasara: Here’s a template from Malleswaram

With crowds in commercial areas during Dasara, Bengaluru’s COVID count is expected to increase. In Malleswaram, a local group has created a street plan to make 8th Cross COVID-safe, and has sought BBMP’s support for implementation.

Written agreements don’t count here – only personal relationships do. Never ever take a ‘panga’ with your water vendor!