Agenda for Bengaluru Infrastructure and Development Task force (ABIDe) is a Karnataka Government initiative  to build a better Bengaluru. The agency’s main aim is to provide solutions to the challenges faced by the city. Given the number of agencies required to be involved in any issue of city level urban and social development, the initiative appears to be a step in the right direction. It makes sense to create a nodal agency to co-ordinate between the various principal stakeholders. 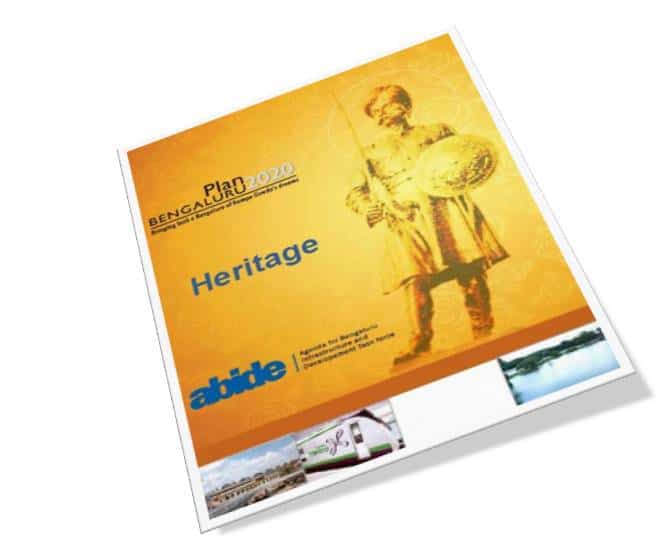 Among other recommendations towards the betterment of the city the agency has just come up with a blue print for Bengaluru’s Heritage. It seeks to direct concerned groups towards implementing a cohesive heritage policy for the protection of the city’s cultural riches.

The heritage blueprint states the necessity of

This is a practical need as planners and development authority need to be aware of what heritage exists on a site / area such that they do not inadvertently diminish its significance in the name of progress.

In effect, heritage needs to be the basis for development and other aspects of infrastructure growth like accessibility, pathways,signage, sewage system and transportation. However,  policy need to be planned in an integrated manner around existing cultural riches such that they maintain the character of the place while  supporting its needs at the same time. For example, one would not advocate widening a road like Sampige or Margosa or even Avenue Road in the name of development at the expense of losing the character of the place.

This is also an important step as heritage is not just grand buildings, temples and forts but also movable items like sculpture, paintings or even a particular folk art / tradition / technique like metal beating or weaving. It could even be skilled craftsmen trained to apply lime mortar, oxide flooring or even roofing thatch.

However, the key is to not be stuck on man-made distinctions of natural, cultural or built heritage but to remember that built heritage is just one of the manifestations of culture.  Humans would have anyway made some sort of impact on  environment no matter how untouched it may seem

This is vital because heritage is something in the public realm; we are conserving for people, for society and not for any personal whim, hence it is important to raise awareness and obtain community support. For example Cubbon Park, it could easily be listed as heritage, not just because of its age but its association with the history of development of the city, its role in the past and its present value as one of just two major green areas of the city. People need to be made aware of its importance so they do not dirty the place, draw graffiti on building surfaces, carve their initials on trees and so on. People need to feel it is OUR or rather MY heritage, not somebody else’s.

•    Setting up a robust protection mechanism, which gives due consideration for private and public ownership

The most important step of course is setting up of some kind of legal mechanism to protect our heritage. Currently Bengaluru has no protection mechanism in place except for the handful of structures protected centrally by Archaeological Survey of India and at state level by the State Department of Archaeology.

We may lament the possible demolition of old buildings like GK Vale on MG road or old shop fronts along Avenue road or St Josephs Science College on Residency road, but legally we can do nothing as these and other countless historic buildings in the older parts of the city are currently afforded no protection by law.

This needs correction and sensitive handling, especially in the case of privately owned sites. Comparatively speaking it is far simpler to ensure legal protection of a public building like Seshadri Iyer Hall or Balabrooie State Guest House or even old Basavanagudi Police Station than that of some bungalow under private ownership.

•    Setting up a nodal agency for identification, protection and conservation of our city’s heritage, tentatively called the Bengaluru Heritage Commission

This too is a step in the right direction. If one starts to list the number of players involved in day to day administration of the city it would be very long indeed and naturally difficult to co-ordinate between them all. One hopes that the Commission will be given suitable powers to ensure rigorous implementation of necessary policies and is not limited to an advisory role.

Hence, while the recommendations sound most promising it remains to be seen how effectively they will be taken forward and implemented. There have been a number of similar efforts in the past towards listing of our city’s heritage, development of legal mechanisms, setting up of nodal agencies, raising public awareness and so on. However,  the fact remains that till  date there is no legal protection mechanism for Bengaluru’s heritage.

The ABIDe blueprint  mentions  some of the past efforts (both public and private) in this direction. One hopes this proposal does not share the same fate as the past efforts.

Hence,  it is necessary for  ABIDe to analyse  why the past efforts haven’t seen the light of day.  It needs to put this reasoning across to the public with a clear vision as to how this time around previous roadblocks will be tackled.

It might also be worthwhile to question if heritage legislation is the right solution. Legislation enacted in cities like Chennai, Delhi, Hyderabad and Mumbai have had a mixed response. They haven’t quite been success stories especially where private property is concerned. Thus this might be a good opportunity to invite experts and  public, including owners of such properties, to work out a more sustainable solution.

The ABIDe draft report on Heritage is available here. Citizens can post their feedback directly on the site.

The detailed list of recommendations should be city specific, based on community and expert opinion. For example, the recommendations while noting the need to develop and maintain a Heritage Register have not taken due note of the concept of Heritage Precincts / Conservation Areas. This is important especially as Bengaluru historically has  consisted of independent pockets namely the two cities of Petay and Cantonment.

The recommendation to establish the Heritage Commission in a historic building as well as the idea of establishing a Museum of Bengaluru within Mayo Hall are appreciated. However, it may be worthwhile to look at rearranging the collections within the current Government Museum and present it as a general history of Bengaluru from prehistoric times to present day. After all, the structure was one of the earliest purpose built museums of the country.

One can then look at adapting Mayo Hall as a Cantonment Museum, given its central location and request the Army to loan some of its collections, related to the setting up of the Civil and Military Station, to the new museum premises. This can open up a whole new avenue of history.

Further,  more guidance could be sought from nationally developed charters like the India INTACH Charter for the Conservation of Unprotected Architectural Heritage and Sites in India.

These documents are available for viewing on the ABIDe website and citizens can post their feedback directly on the site.  ABIDe should continue  having a participative and not a consultative exercise with experts and public  and come up with a  city-specific, feasible and sustainable solutions to the issue of our fast vanishing cultural heritage.

Young and bright Hebbal candidate – knows policy, can he practise?

Sridhar Pabbisetty, an MBA and Loksatta candidate from Hebbal, presents a welcome picture to even the most cynical, and especially to the young and the middle class.

Pavement Perorations – Part 2: Can pavements be used for walking?

I kind of got hooked on this quiz thingy.  And while it is a bit strange to be asking and answering the questions myself, I love the fact that I know all the answers. My

Silks to substations – Sarjapur through the years

Today Sarjapur is witnessing unprecedented residential and commercial development. What was Sarjapur like, a century ago? Is there anything left, that holds the key to its glorious past of silk markets and surveys?