This morning, Bengaluru put on its running shoes to sprint up to 10 kilometres. There is all the fanfare and hooplah surrounding the 10 kilometre Sunfeast run, most often mistaken for a marathon (a marathon’s distance is about 42.2 kilometres). 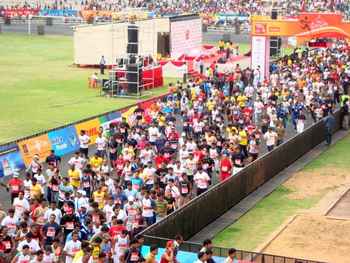 With such hype, one often wonders what goes into organizing and preparing for a mammoth event such as this. Rumors have begun to do rounds – the celebrities who have pledged to raise funds are failing and backing out. People are highly likely to continue with some ever-so-often-heard rants – “The traffic was blocked and we had to walk the whole distance”, “People on wheelchairs had a lot of difficulty”, so on and so forth. Then there are the questions – will the run this year meet expectations? Will there be mountains of plastic garbage yet again? Is it just yet another commercial event?

I talked to some people associated with the run earlier last week, to get some honest views.

Do we really need an event of this scale?

”Glamour plays a big role in attracting the huge number of people off their couches to come out and run. More importantly the NGOs get a nonpareil visibility”, says Meena Dave of Give India, who is heading the volunteer team of Bangalore Cares, a NGO who have partnered with the organizers, Procam to coordinate with the NGOS looking to raise money through the event.

Runners can register for a particular charity and request well wishers to donate through the Bangalore Cares website.

”Marathons are a very effective and low cost way of generating funds. Our expenses are less than Rs. 40,000 and we are hoping to reach the Rs. 10 Lakh mark”, opines Vishal Thalreja, Co-founder & Director, Dream a Dream, an NGO that works with children.

Kavitha Krishnamoorthy, founder of Kilikili, an organization that advocates inclusive play spaces for children, says, “Such an event gives a peg for smaller organizations that can’t invest time and energy in fund raising”. She is hoping to raise about a Lakh this year, a third of their annual budget. 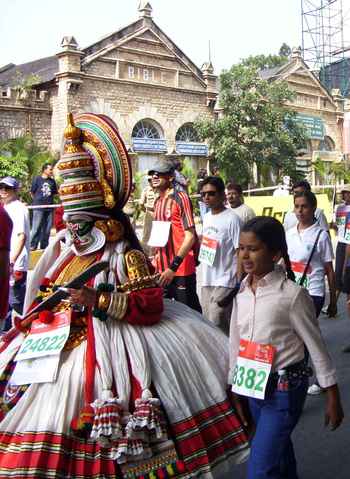 Is it just yet another commercial money making event?

Santosh Padmanabhan from Runner’s High, who is coaching kids from Ananya (a school for underprivileged children) and Thulir (an education resource centre for children) for the run, feels that the Sunfeast Run is all about money.

He has run for marathons abroad and has not seen them charge any money for the NGOs. “In fact organizers usually give a percentage of their profits to a chosen NGO but here Procam is busy spinning money out of the whole affair”, he says.

Thalreja however says, in the case of runs abroad the NGOs can block a few seats and are allowed to auction them at a higher price to make some money. NGOs can use a generic platform like JustGiving.com to raise money. “Eventually we will move to that level.”

Thalreja, who is also on the board of Bangalore Cares, clarifies, “the fee of Rs. 2000 goes (to Bangalore Cares) so that they can sustain their much needed effort”. However, the run itself was a big-ticket event, with many well known brands associated with it.

What was expected from this year’s run?

From the first event last year when 18,000 people had registered and Rs. 43 Lakhs were collected for charity, there has been increased response this time around. “There are around 23,000 people running. We are expecting it to reach Rs. 1 Crore benefiting 92 NGOs that have registered”, says Bruno Goveas, Director, Public Relations, Procam International.

“Bangalore Cares (website) has improved significantly”, says Kavitha. They had incorporated a payment gateway and personalized web pages for those pledging. “They have done a much better job as facilitators this year”.

Aarthi Muralidharan, a software professional with Dell has been volunteering with Ashwini Charitable Trust (ACT) for the last five years. She says this year’s run has been much better organized. They have close to 130 runners and have managed to go rake up Rs. 10 Lakhs as compared to Rs 1 Lakh last year.

What goes into making such an event a reality?

Kanishka Lahiri, an engineer with AMD running for Runner’s High, comments on the logistics, “It’s never easy to organize a race with tens of thousands of participants. Overall, I’d rate it a B+ compared to other races I’ve seen (Philadelphia, New York, and New Jersey Marathons). It was good to see emergency medical help available and frequent water stops”.

Meena exclaims, “We never think of the small details that go into organising an event on these scales – imagine 25,000 goodie bags each having 5-6 items to be put together manually. Ensuring that every person has got the correct running number and knows where they have to be on the Run Day”.

“You cannot entirely control the event because it is outdoors and not at one fixed location. We have to work with various organizations. The difficulty is to make people understand that there is a huge database, kits to be handed out…If it rains this Sunday, we can’t really do anything about it. Such unpredictable things can happen”, points out Goveas.

What have been the lows?

“The paucity of information on the website about basics such as the timing of the runs, and the location and other details of the expo makes it tough, especially for out station participants”, points out Rahul Varghese, the founder of Running And Living Infotainment, who is here for the run all the way from Gurgaon.

Kavitha found the waste management last year a major turn off. Lahiri adds, “The main irritants were the indiscriminate use of plastic bottles at water stops, and the annoyingly late start which makes one question whether the welfare of the runners might have been compromised in the face of the fundamentally commercial nature of the race”.

There were 40,000 Kingfisher (250ml) mineral water bottles on the road last year post the event. This was an eyesore to many.

Kishan Bhat a software professional with McAfee, who is an environment enthusiast, has come up with an estimate of the green house emission caused by the plastic bottles given out,

This year, Saahas, an organization that works in waste management, has been engaged to manage the waste generated this year. Many like Bhat are volunteering with them to solve this issue.

What have been the highs?

”We won 2nd prize worth 50K for the Costume Competition last year. This year merely preparing for the same has been great fun. It brought our volunteers close together and we had some wonderful moments”, exclaims Kavitha.

Varghese says, “There is lots of awareness about the event and the celebrity-value adds to the sex appeal. The main plus is that there would be less vehicles on the roads and therefore less exhaust-pollution for the runners. It would be cooler this time”.

“It’s such a joy to know that almost 100 NGOs will get to be seen and maybe heard, and that people will donate, maybe only since it’s a huge event, and also we get to know that the Corporate India, does think of social issues and not just of their profit margins”, says Meena.

Lahiri says, “I firmly believe that running is a great way for people to come together, be healthy, and lead better lives. I felt glad to be part of what is quickly becoming one of Bangalore’s most visible public events”. He is hopeful that the Sunfeast 10K will go a long way in getting people off their couches, and onto the streets!

He adds, “the route is an especially good one for running. It takes you through a few of Central Bangalore’s finest tree-lined avenues (there are precious few left!). It’s mostly flat, with a few teasing slopes thrown in to make it sufficiently interesting. The last stretch, through Cubbon Park, is a fitting finish for the Garden City’s biggest racing event”, says Lahiri.

What causes have people selected?

Many runners are supporting various NGOs working in the field of education to environment to the differently-abled.

This year, my personal favourite is Rang De (http://rangde.org/). It is not seeking donations like other NGOs but looking for social investors in micro-finance. They provide small loans up to Rs.15,000 to the poor (who have limited access to financial credit). The borrower will return the same with 8.5% interest out of which 3.5% is paid to the social investor.

Archana Ramakrishnan, a coordinator with Rang De says they have got 60 new investors, who have pledged a total of Rs. 3 lakhs. About 20 runners are running for them.

What do the beneficiaries have to say?

Shambulinga was sent to live with his uncle when he lost his father at a young age. He delivered newspapers and cleaned cars in the mornings before school due to financial difficulties. These difficulties not withstanding, he went on to score an astounding 96.12% in the SSLC exams this year. He like many others went on to complete their high school education on a scholarship from India Literacy Project.

A runner last year and this year too, he puts it best in his words, “If my running means that other children like me and in conditions worse than mine have a chance to education, then how can I turn away?”

Last year I was not able to run as I participated in costume contest for Kilikili which was great fun. Winning the prize gave a real kick! This year I managed my 10 kilometres in spite of a sprained foot. I caught up with old friends and made new ones! It’s not important who I ran for, all that mattered was I was out there.

About Mayank Rungta 3 Articles
The author has not yet added any personal or biographical info to her or his author profile.

Girls from Carmel Convent school in Jayanagar make up most of Karnataka Volleyball team and won the nationals in first week of December. Sports help us concentrate on academics better. say the students