Umesh V and his colleagues at The Mobile Store on 24th Main Road, JP Nagar 2nd phase shell out around Rs. 1200 to Rs. 1500 a month, from their own pockets. The reason? Hijras come to their shop every day, demanding money, forcing them to pay anywhere between Rs. 10 and Rs. 50 per day. “In a day, they come around four to five times. In a group there are around three or four of them. If you do not give them money, they use bad words or attack us and pull our clothes,” says Umesh who has been facing this problem for the past year and a half.

Umesh’s complaint is echoed by several other shopkeepers in JP Nagar who are facing ‘extortion’ by hijras. Known as the third gender, a hijra or eunuch is a transgender person, biologically male, who takes on the role of a female. Hijras usually dress as women and do not necessarily have genital modifications.

The store manager of JP Nagar-based The Home Store, C K Chengappa says, “These people come from Tamil Nadu. I know it because they speak Tamil. They just make money and go. They have even made about 25 grand (Rs.25,000) in one time when a new hotel came up in the area. We end up giving around 200 to 300 rupees a month. We write it in our accounts.” Chengappa says this problem has persisted for about two years now and his superiors in the Delhi head office ask him why they do not fight back.

In Café Coffee Day, right next door to The Home Store at Aurobindo Circle, waiters part with their tips when hijras come begging. Café in-charge Sathya N C says they give around Rs.50 per week. Even they complain of being attacked if they refuse.

Karthik V who manages the Genesis Fitness Forum, a gymnasium on 24th Main Road, JP Nagar 2nd Phase says he never says no to the hijras who come begging to his gym. “They come weekly twice or even five times. They come in groups. I never say no. They take advantage of this and inform their friends. So more people come. During the aerobics session, they come, they remove their clothes. They do a lot of naatak,” Karthik says. “I give them money if they are regulars. They eat paan paraag. During the kids session, they do dirty things. They dance in front of the mirror.”

He goes on to narrate an incident during a kids’ session at his gym when a group of hijras approached the gym. “I immediately closed the shutters. I told my people upstairs to also close the shutters. They started breaking the shutters. I had to give them Rs. 250, only then did they leave,” he says. Karthik called up the cops that day who just told him to give them the money. “They say, even if we come we can’t do anything,” he says. Members at the gym have even written complaints pertaining to this in the Suggestion book, says Karthik.

In a juice shop close to Genesis Fitness Forum, Karthik says the hijras created a ruckus one day because the owners refused to give them money. “They removed their clothes. The juice shop guy called all his people from the other branches of his shop.” Workers at the juice shop, who did not want to be named, say that the hijras misbehave with their customers, often threatening to drop their clothes.“They come in big gangs and their behaviour is hopeless,” they say.

Chengappa says they have made attempts to refuse money.“One of my staff told them to get out once. They just took off on him,” he says, adding,“I now hear they carry blades with them.”

The hijras: give us jobs, we are denied dignity

But hijras complain about the lack of recognition by the government towards their community. Bangalore is home to more than one thousand hijras. Around 600-700 of them work with Sangama, a sexuality minorities human rights organisation for individuals oppressed due to their sexual preference. Sangama’s head office is located in JC Nagar. Says 25-year-old Akkai, a kothi (in the South Asian context, a male homosexual who is feminised and takes a passive/receptive role in sex), who works with the Information Division of Sangama, “Government should take responsibility and provide them with proper jobs and education.” 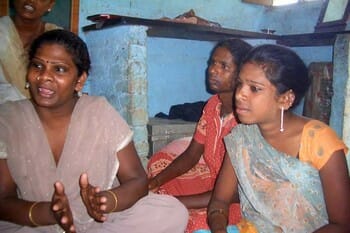 Hijras explaining their side of the story (pic: Vaishnavi Vittal)

Akkai says she knew two hijras who worked as receptionists in a company but were eventually forced to quit because of discrimination in the workplace.

Twenty-eight year old Kokila, a hijra who works with Sangama, says the only options for hijras are begging and sex work. “We are poor, part of the lower class of society. We do not have jobs. This is the way we can feed our stomach,” she says. Kokila says there are both good people and bad people in their community. “There is a mistake on our side also. Sangama is here to empower them. During our meetings, we tell them not to force or harass shopkeepers,” she says.

Kokila takes me to her sisters’ hamam (bath house) near Bannerghatta Road. Selvi, Mini, Anitha, Amulya and Muthulakshmi welcome me, immediately apologising for not having any lights or fans inside. The hamam itself is very small, with barely any space to lie down. They offer me something to drink. I decline their offer. They request me to not write anything wrong about them. I assure them that I will only write what they tell me and not fabricate their statements.

Selvi, 33, who lives on Bannerghatta Road, says even they are harassed when they go begging.“If we go into a bar, they ask us if our breasts are original or duplicate. They touch our breasts. They threaten us,” she says. Kokila says they need to be treated with respect. “Will anyone touch a girl’s chest?” she asks. Selvi says they make it a point to not force shopkeepers to give them money. “We have an understanding. We tell them not to fight. These days more action is taken. They’ll put us in jail. It is better to take what money you get than be in jail,” she says.

In her mid-20s, Mini says she has often been teased by college students. “The students tease us. But if we complain, they start screaming saying we tried to steal their cell phones or tried to have sex with them,” she complains. Mini, who moved to Bangalore from Kolar Gold Fields around ten years ago, narrates an incident when she went to a condiments store in JP Nagar. When the shopkeeper refused to give her and her sisters money, they asked for some chips to eat. The shopkeepers started beating us, she says. “We wanted to go to the cops but they will take action against us only,” she says.

Twenty-year-old hijra Anitha says shopkeepers say they will give money only if we show our private parts to them. “They throw stones at us. They scold us. They have even thrown tomatoes and eggs at us,” she says.

On questioning the shopkeepers as to why they had not filed any complaint, there were some mixed responses. “Cops don’t take these cases because they can’t make any money out of this,” says Chengappa. Mohammad Ali Thanzil of the Aashirvad Departmental store in JP Nagar 2nd Phase says other shopkeepers do not cooperate even if they want to do something jointly.

Government intervention – underneath the layers

Chairman of the Karnataka State Commission for Backward Classes (KSCBC), Dr C S Dwarakanath says the main problem is that hijras and kothis do not have an identity till today. 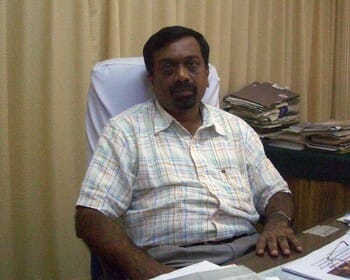 “Forms only have male or female. I want to give them an identity. The commission wants to look into this and study them in detail, put them in categories and see where they fit,” he says. Dr Dwarakanath said that once sexual minorities are given an identity, they could get benefits from the government like ration cards, medical, reservations and so on.

The victimisation of the hijra community has been documented in several reports. In 2003, the Peoples’ Union for Civil Liberties, Karnataka (PUCL-K) brought out the “Human Rights violations against the transgender community” report based on a study of kothi and hijra sex workers in Bangalore. The report including narrations of police brutality on hijras in the city was translated into Kannada. Arvind Narrain of Alternative Law Forum (ALF), a Bangalore-based lawyers’ collective, was the co-author of the report. Narrain says that that the PUCL-K report changed the way cops see transgenders. It has made them slightly nervous, he says.

Referring further to legal lacuna, Narrain says, “This is a human rights issue that can no longer be ignored. The law conditions the way the police perceive transgenders. They look at it as ‘animal-like’ and ‘dirty’ in terms of behaviour. Therefore, they deal with them that way.” Narrain says the ALF is working closely with regard to repealing Section 377 of the Indian Penal Code because it denies constitutional rights to sexual minorities. For his part, Dwarakanath says the KSCBC is thinking of an Act for the Scheduled Castes like Prevention of Atrocities. “We want to bring out an Act for them. I have spoken to National Law School,” he says.

In October this year, the commission is scheduled to carry out a state-wide census for which they have already been given Rs.21.5 crores by the Centre, Rs.2 crores from the state and State Chief Minister B S Yeddyurappa has promised a sum of Rs.17.5 crores, says Dr Dwarakanath.

Coming back to the troubles faced by JP Nagar’s shopkeepers, even as some members of the hijra community agree that there are some hijras who harass people, use profane language, make obscene gestures and even make sexual advances, they say they do not endorse the same. Kokila says because of these people who misbehave, the ‘good’ people of their community are affected. “We will take how much money you give. We need to have an understanding. We will respect you just as you respect us. The public treats us worse than dogs,” she says.

Selvi says she wants people to understand that they are like anyone else. She says, “We do our work, you do your work. We also have brothers and sisters. They shouldn’t tease us. The public should keep quiet. We will be happy.”

Sangama holds weekly meetings for their members, at all their nine offices in the city, during which they advise their members not to indulge in such behaviour. “Sangama does not support hijras harassing and attacking people, lifting saris, giving shaapas (curses). Every Sunday we have a meeting where people come and share their problems. We motivate them. We have knowledge building and capacity building,” says Akkai. They also have a crisis group which consists of about 10-15 members who are available on stand-by 24/7 to support the hijras in case of emergencies.

In the meantime, the shopkeepers at JP Nagar are a glum lot. Chengappa agrees that jobs for hijras are the issue. He says they should work in a factory instead of begging for money. Umesh of The Mobile Store says they have spoken to some shops and are thinking of giving a formal complaint. Karthik, on the other hand, plans to take matters into his own hands, by deputing a security guard for his gym.

We are mostly a generation of overprotecting parents. When would I finally have the courage to let him be on his own, without parental supervision in every step of the way?

The smaller Puttanahalli puttkere, in JP Nagar VI phase becomes a dumping ground for waste and is getting steadily eaten up by encroachments.

Karnataka’s pollution watchdog recently charged southeast Bangalore’s elite apartments with polluting the already threatened Bellandur lake. The cloud, though, is on the regulations more than the violators.