It is abundantly obvious that Bangalore today is a war zone where the inhabitants subsist in a constant state of mortal peril. Don’t look now, but there’s somebody popping up at your window for a spot of neighbourly homicide of an evening. Negotiating traffic isn’t your biggest cause for concern on our congested roads. No, that would be the chap with the backpack at the signal who looks a bit cross about something. Any minute, he’ll stop with the glaring and start saying it with a Kalashnikov. Then where would you be? 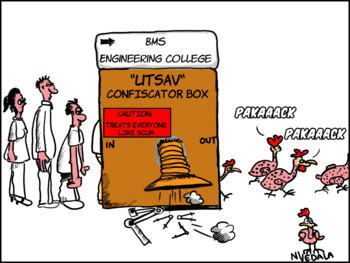 Our netas barefacedly usurp the strongest and most muscled members of our security forces to safeguard their precious skin which, despite its thickness, is apparently incapable of stopping a few bullets. But what about the rest of us measly ‘inconsequentials’? How can we possibly survive without Z plus security when a group of disgruntled terrorists who consider our very existence a personal affront, plot our swift end, even as we speak?

Indeed, doesn’t the prevailing tension turn us all into potential thesis subjects for NIMHANS? There’s no accounting for what we may do next in our frenzied states!

Luckily though, while the rest of us walk around in a state of extreme panic, wringing our hands and exclaiming: What to do? What to do? One of our leading centers of technical education has shown us the way forward. During their magnificent fest Utsav, BMS College of Engineering adopted a hard nosed approach in dealing with the scourge. The approach, like most of the theorems studied at BMS, is elegant in its simplicity – ‘treat everyone like terrorist scum’.

The situation we find ourselves in at present is very similar to that of a maximum security prison. Every inmate is a convicted criminal, quite capable at any moment of doing something inexplicable, if provided the opportunity and means. Hence, the simplest solution is to treat them like the deranged lunatics they are and ensure that they don’t come within an ace of getting hold of anything remotely dangerous. It is this very model that was brilliantly replicated by BMS College, to encompass all visitors to Utsav.

In the interest of our readers, this reporter will now proceed to describe the various steps that are followed, to attain the entirely fool proof security arrangements as witnessed at BMS, so they may be swiftly replicated in all homes, schools and workplaces.

First, a strong army of well built, tough looking blokes is posted outside the gate to scowl at anyone who tries to enter, so as to scare away those planning activities of a dubious nature. All those courageous souls willing to brave the wrathful stares of this patrol are then made to stand in single file outside a narrow gate. This policy may not be relaxed irrespective of the length of the line or the urgency of the Potential Entrants (who shall henceforth be referred to as PEs). Those failing to respect this policy must be simultaneously whistled and yelled at until they comply or clear off beyond 50 yards of the area.

One member of the Gestapo will then walk along the line shouting, “Empty your pockets!” repeatedly into the ears of all PEs. This reporter is loath to criticise but perhaps at this point, a few cycles of ‘Attention’ and ‘Stand at ease’ would have been appropriate. Alas, this was overlooked by the BMS Gestapo.

Once the PE has reached the front of the line he\she must be set upon simultaneously by three members of the Gestapo. One will grab the items the PE has by now taken out of his pockets/ wallet, and proceed to rummage through them, taking particular care to examine any piece of paper that may be present for suspicious, propaganda spreading text. Another will summarily yank away any other of the PE’s possessions, such as bags, and forward these for inspection. A third will yell at the, by now, rather bewildered PE to display some id immediately. The id produced will be carefully examined and contrasted with the face of the PE to ensure a perfect match.

Once the PE has satisfactorily cleared this stage, he\she is ushered forward to the next stage where further two of the Gestapo wait. It is essential that the two members of the force most lacking in squeamishness of any sort be selected for this task for it involves a thorough search of the bodily person of the PE, leaving (to mangle a metaphor) no stone unturned.

The hardy PE who comes through this search with mind and body intact must then proceed to the table where his\her belongings are searched with a comb whose teeth are of the greatest proximity. In this task, the golden rule is, ‘take no chances’. Therefore, anything metal with a remotely pointed edge (rulers, compasses) must immediately be tossed into a bin provided for that purpose. Yes, BMS is an engineering college but surely, you will agree, security takes precedence over the need to draw straight lines or circles. Anything flammable or potentially flammable, or indeed anything that the Gestapo isn’t entirely convinced to be incapable of causing a flame or getting in someone’s eye, joins its lethal comrades in the bin.

The tossing of these objects in the bin must be carried out with complete authority. If a PE protests over the confiscation of some trinket, a fierce glance and a threat shall be used to quell the pathetic insubordination.

Finally, once it has been established that the PE is officially incapable of causing any major damage, or at least, nothing that could become lethal in a hurry, he\she is allowed to proceed forth.

You are then allowed to partake of the wondrous happenings that Utsav entails; with a mind entirely free of care knowing that, win or lose; you certainly cannot be shot or stabbed!

In this world of uncertainty there is no denying that, peace of mind of that magnitude cannot be scoffed at.

About Sarath Balachandran 1 Article
The author has not yet added any personal or biographical info to her or his author profile.

Bangalore is indeed a ‘Garden city’ even now; not many can boast of such vast gardens in the heart of the city. Blessed with a pleasant climate and fertile land, Bangalore was also fortunate to

BESCOM is just more “public utility service” that harasses the public, in a city aiming to be a “global metropolis”. Worse, unscheduled shut-downs are the height of administrative arrogance and incompetence.