Last Monday (20th April) afternoon was witness to an inflow of people into the Bhageerathi auditorium at BNM School, Banashankari II Stage. The reason, Jnanajyothi, the Senior Citizens’ Forum of the locality had organised a one hour talk by S Shadakshari of the ‘Kshana Hottu Aani Muttu’ fame. An opportunity that many senior citizens of the locality were not willing to miss despite the threat of imminent rain. 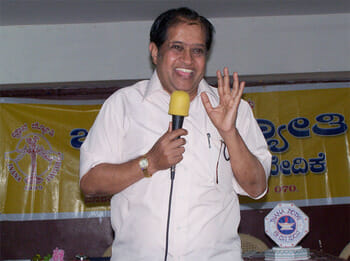 Jnanajyothi has been, for the past 9 plus years, organising monthly meetings of its members with the intention of enabling a common meeting ground for Senior Citizens of the locality. A forum where, among many other things, the senior citizens can interact with each other (and youngsters, too), learn about new developments in areas like medicine / healthcare, finance, et cetera, while also having time specifically for themselves. The meetings have been invariably held on the third Monday of each month these past 9 odd years.

S Shadakshari needs little introduction. He is already well known in Karnataka and among Kannada-loving people for his famed daily musings titled ‘Kshana Hottu Aani Muttu’ (Pearls of wisdom in an instant), inspirational articles that take less then three minutes to read but the impact of which can often be life long. Two books by the same name (Parts I and II) have been published with over a 100,000 copies being sold. Shadakshari is the Managing Director of the Ramanashree Group of Companies. An electrical engineer, he is also a builder, a professional trainer, an avid Ganesha idol collector (he is believed to have over 2000 of them!) and a philanthropist – all rolled into one. Through his personality development programmes, Shadakshari has touched the lives of over 25,000 students – no small achievement.

On Monday, 20th April 2009, if one came to his talk expecting a lot of ‘gyan’ about how senior citizens should live their lives, the person was bound to be disappointed. The session was definitely NOT a one-sided monotonous sanctimonious preaching by a person to a group of people. It was instead a highly interactive session in which Shadakshari ensured that, from the word go till the word bye, each and every person in the auditorium, be it the senior citizens or the event photographer or the person helping with the infrastructure, actually listened to each word uttered by him.

Using a lot of incidents and short stories, Shadakshari made his audience reflect on some of the challenges in life that they have faced / are facing including ill health (being diabetic, hypertensive, et cetera), handling loneliness (not having any one to talk to), enduring pain and spending (or rather not spending) adequate time with children and grandchildren. During the talk he suggested a 2-step method (one of the many possible ways) of handling challenges:

He consistently ensured that, in addition to a generous dose of humour, there were many brief personal (one-on-one) interactions with different members of the audience. For example, he successfully managed to take back in time (to their first movie together) a couple of over 50 years of married life – he actually left the wife blushing at the memory – a very beautiful sight to behold. The net result – those who attended left the venue with some empowering thoughts.

While what was immediately apparent was the rapt attention of all gathered towards what Shadakshari was saying, what was indeed amazing was the enthusiasm with which the senior citizens participated in the interaction. It was indeed a sight to see people aged anywhere between 60 and 83 years coming neatly dressed to the occasion, seating themselves in an orderly manner and participating whole-heartedly in the day’s events.

This reporter left the venue with a deep respect for not only the speaker but also for the various senior citizens who still displayed a zest and enthusiasm towards life and living despite whatever trails, tribulations and moments of glory they may have undergone in their 60 plus years of living. ⊕

Salt: Why less is more!

Too much salt can result in many problems, while too little can also do the same thing. Strike a balance with your salt intake!