Bangalore, the Silicon Valley of India, one of the fastest growing metros in India where opportunity knocks at everyone’s door; is shrouded with the gory mystery and horror of Child Sexual Abuse. Dr Shoiba Saldanha, a gynaecologist and counsellor by profession, who is an active part of Enfold, a Koramangala-based NGO, says that 30-40 per cent of the patients who visit her are such cases. Presumably, most of these cases are not legally recorded. 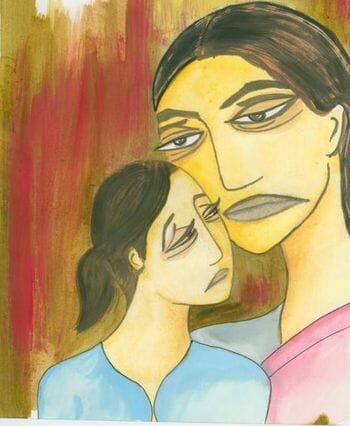 Dr Shekhar Seshadari, NIMHANS, Bangalore, in a study conducted in the late 1990s on 146 boys found that 15 per cent had been sexually abused by family members, friends or neighbours and this homosexual abuse started at 6 years of age.

Children are caught deep in the stranglehold web of a patriarchal society in the disguise of modernity. For many children the beautiful dream of childhood has a strong association to horror that scars them for life. A common question that arises in everyone’s minds is, who is targeted and by whom? The answers that we tend to derive are our children are immune, it usually happens to children from the lower strata of the society, or children who are neglected or left alone, who are introverted and gullible…and people who usually do molest or rape children are strangers, a hidden face, somebody evil. Everyone believes that they or their child is somehow immune from this gory crime.

What parents or caregivers or guardians do not realise is that child sexual abuse is a crime that can happen to anyone, by anyone. It is not restricted to particular strata of the society or children, or only people who are ‘abnormal’ and not ‘normal’ do something like this. We do not realise that the predators could be anyone; most sexual abuse of children is done by close family member, friends or neighbours that is someone we know closely, someone we would entrust our children to.

In most cases, the abuser starts with trying to gain the complete confidence of the child, where he/she uses a ‘grooming period’. They usually are very nice to the child, then it moves on to touching, the touching is not like a usual hug, and the child realises it and feels uncomfortable but is silent. The child is thoroughly confused; he/she does not know what is to be done. "The abuser either bribes the child or threatens the child with loss of love, pain or other such suggestions," says Shoiba.

The age at which sexual abuse is the maximum is between the ages of 6- 10 years, where the body of the child is beginning to develop. "This is the time when children are in a fantasy world of their own; their mind believes anything and everything. And threats of any kind would work very well on a child," says Shoiba. It is the confused state of mind of the child that is worked on very methodically by the abuser.

One case in Bangalore

One case as highlighted by Shoiba was a girl of nine, who reported problems of urination. The child was diagnosed with Herpes Type 2, a condition caused only due to sexual transmission. "The first reaction of the parents was that of disbelief. It was after a few weeks the same problem recurred; the family doctor advised the family to talk to the girl. It was later found that the child was being sexually abused by the neighbour who was a close friend, and the child would go to his house every day," says Shoiba.

The parents were thunderstruck and were one among the few to get legal help in the case; what was the outcome? The wife of the neighbour went to the mother and begged that they withdraw the case, as it would shatter her family and the life of her child. When the mother refused, she was bribed with money. The mother was appalled and refused; to her shock the distraught wife says, "The others accepted money."

Concepts like ‘family name’, ‘family honour’, a wife’s role to accept and silently take what her husband says or does, the family bond lies only in the hands of a woman. It is an irony, being one of the fastest growing economies, many are still bound by the mundane norms and the hypocrisy of the society reeks with each ‘tradition.’

In cases of Sexual Abuse, the child is already in a fragile state of mind, and most cases never open out. With the ‘family name and honour’, the child’s rights, needs and the support that has to be given to the child go in the background. Majority of the children are brought up in an environment where they taught to be obedient to elders and listen and do what they say.

This case was also one of the rare cases where the parents took legal action. Shoiba was called to testify as an expert witness to the court. She says, "I got the summons four years after the incident and when I went, the defendant lawyer asked for 2 months time, which he was given after warnings. When I went to the court again, I was asked the most ridiculous questions like ‘How is it possible? The hymen is still intact, the child is imagining things.’ I was shocked, to top it all the child who is 14 years now, was being summoned in a full court room and asked the most absurd questions. What is the point of it all?"

The outcome of the case is unknown; she was not summoned on the case after the incident. The incident is quite horrifying.

Who are the people who abuse? Why do they abuse? It is not like in the movies, where the ‘Big Bad Guy’ is depicted in a long trailing coat, with a hat and pipe in the mouth. Anybody could abuse a child sexually; even seemingly normal people who have children of their own.

The reasons as to why one sexually abuses a child are very complex and varied, especially with majority ratio being close relatives, friends or a known person.

Says Shoiba, "There are two controls that have an abuser would have to break; one is the Inner Control – this is the inner innate sense of every individual to not hurt the little one of their own. Then is the Outer Control – it is the social control or cultural control that a child cannot be harmed and sex with children is wrong. A person has to break both the controls to sexually abuse a child."

It is very important that an environment of trust and strong bond is created. Says Shoiba, "The child should feel important to open up and feel that they are going to be believed and will get all the support in the case." Unfortunately, children are given secondary importance. Most parents do not even recognise the subtle signs of child sexual abuse.

In cases where there is no physical sign, the scars go deeper into the mind. A case of abuse comes to the forefront only when there are blood stains or where medical attention is required. And even if a case of child sexual abuse comes to the forefront it is shrouded and the child is told ‘such things always happens’, ‘stay out of the person’s way.’ And parents do not even realise that the child has a problem. It is taken under ‘disciplinary’ training of the child, if the child behaves ‘difficult.’

There are a number of indicators of incidence of child sexual abuse. Dr Seshadari calls it the iceberg model, where at the tip of the iceberg children who become introvert, scared, shy and aloof; then there are children who suddenly are scared of certain things like dark, they do not want to go to school, scared of certain people and things all of a sudden; they tend to show sudden sexualisation in behaviour, have temper tantrums, become aggressive, unsocial, and unreasonably shy or difficult.

But a large number of children show ‘apparently normal’ behaviour and good functional life, this form the submerged major part of the iceberg. They have to disclose the incident by themselves. Child Sexual Abuse has its long term consequences on the psychological built of the individual. The scars last for years, could lead to dysfunctional relationships, lack of trust in men or women, suppressed anger, phobias and many more.

What can parents do?

What is it that parents can do? How are they supposed to react? React in a calm and controlled manner; it is very important that the child feels safe and secure. "The child should never feel that they are responsible for what has happened, he/she must realise that what was done to them was never their fault. It is never the fault of the child." Says Saldanha. It would be helpful if the child is taken to a counsellor, and given proper defences against the trauma.

There are a number of NGO’s and helplines in Bangalore that parents can contact. Enfold is one organisation that are working on a format for children and parents, where parents and teachers in schools are trained how to deal with such issues, bring one session in every school, where teachers have a close and friendly interaction with every child. Enfold strives to create an environment of trust and bonding, where a child feels respected and understood; where the child believes that he/she will be believed.

Shoiba says, "We, at Enfold are also teaching young girls from class one on matters of personal safety where they are taught about a ‘safe’ touch and an ‘unsafe or sexual’ touch and how to handle it and if something like that ever happens it is best that they tell it to someone. Anybody they feel comfortable with."

If every individual home builds an environment of safety and support for every child, and where every child is taught how to deal with issues relating to personal safety; it would be a better world to live in.

Some pointers of activities in the city

2. Enfold Health, Conducts a number of workshops with law enforcing forces, helps create awareness on CSA, presently working on a format for children and parents, where parents and teachers in schools are trained how to deal with such issues, bring one session in every school, where teachers have a close and friendly interaction with every child. URL: www.enfoldindia.org. Enfold Proactive Health Trust 553/B, first floor, 8th main road, 4th block Koramangala.

3. Ms. Anita Ratnam, Samvada, 303 Rams Infantry Manor, 70 Infantry Road. E-mail: samvad AT mahiti.org (Counsels college students who have been sexually abused in childhood. Conducts counselling training for organisations and groups which want to learn how to counsel teenagers who have been – or being- sexually abused. They travel all around India, Nepal, Bhutan, Sri Lanka and Pakistan. ⊕

The programme aims to equip students in the schools of Bengaluru with knowledge and inspire them to take part in participatory democracy and become active citizens.

Improper planning, unclear design, and sans a public consultation, the state government’s proposal to build a war memorial at the Indira Gandhi park has irked some Bangaloreans.