Does one call it a lake or a pond? Perhaps it may be better to just refer to it as a “kere” or a water body, since it was clearly once a lake that, over time, became a pond and is now steadily shrinking in size. Some people call it “Arey kere”, others as “Puttanahalli puttkere” to differentiate it from the much bigger Puttanhalli Lake. Call it what you will, this kere is fighting a losing battle for survival – like other water bodies in Bengaluru, like the tall shady trees now being chopped down on one pretext or the other, like the drying gardens that once gave their name to the city. 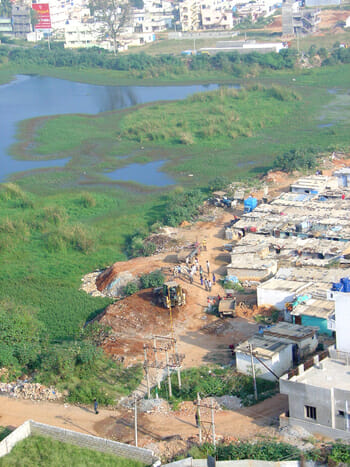 The kere lies between Puttenahalli in JP Nagar VI Phase and Lakshmi Layout, between the north west boundary of L & T South City apartments and in front of the Brigade Millennium residential complexes. Once a fairly large water body that used to attract various kinds of birds, it has become more of a dumping ground for waste and debris generated from the adjoining houses and a slum that is growing as rapidly as the kere is shrinking. With the encroachment steadily eating it up, the water in the lake has diminished to no more than a few puddles.

Some of us residents of L & T South City got together to mount a “Save the Lake” campaign. We wrote to the Chief Executive Officer, Lake Development Authority on 19th January 2009, highlighting the rapidly deteriorating plight of the lake with photographs taken on 11th June 2008 and 8th January 2009. We sent a similar letter, dated 26th January 2009, to MLA, Bengaluru South, M Krishnappa through his personal secretary.  When no reply was forthcoming, we sent an email to Deputy Commissioner (Urban) on 20th March 2009.

Other than some rumours that the MLA had located an alternative settlement for the residents of the slum and that the DC had approved of a plan to renovate the lake and develop it, we have heard nothing officially from anyone. There is no sign of any development work whatsoever being undertaken there. On the contrary, we only see more gravel and stone getting unloaded there, more land is getting reclaimed and new houses are coming up at a fast pace.

The kere is in a low lying area with tall buildings all around. During the monsoon, with rain water flowing naturally into it, the kere would act as a reservoir, keeping the roads well drained. Now, however, with active encroachment on the tank bed and blocking of all the water inlets, there is a very real danger of the area getting flooded. Ironically, it is those who have usurped the kere land that will be the most affected. The authorities need to take immediate action in order to avert this calamity. Concerned residents in the locality are prepared to help the authorities in whatever way they can. We understand that L & T South City had even earmarked a certain amount for development of its immediate surroundings. However, till the authorities reclaim the land by evicting the encroachers we are helpless.

Every monsoon sees inundation across the city, houses are marooned and precious lives are lost. Will only a crisis make the government realize the existence of our kere? Will it then be too late to do anything to save the kere, prevent flooding and bring the birds back? ⊕

Carpets of blooms that lift us from gloom

Bengaluru needs more and more such trees that bloom and help us forget our worries, says Deepa Mohan.

How Bengaluru is helping Chennai during floods

Citizens and groups are jumping in to help the flood-affected in Chennai and other parts of Tamil Nadu – Pondicherry. A guide to who is doing what, and how you can help.

IAS officers have many stories to tell. This is one of the stories that now-retired, famous IAS officer, Raghunandan has to tell – it is not just his story – it is the story of the city too.