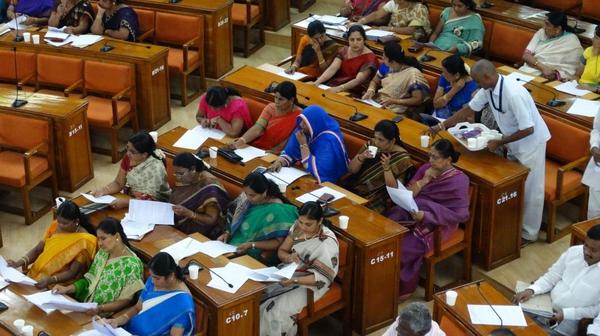 BBMP spends an average of Rs 1.35 lakh on food and other arrangements during council meetings. Pic: Shree D N

The five-year term of BBMP council has come to an end and namma Bengaluru is gearing up for yet another election. Before you get into election mode, ever wondered how much public money has been spent on your corporators and how frequently the BBMP council meetings were held in last five years? Here is a peek into such lesser-known facts.

While council meetings are considered as an opportunity for the elected representatives to discuss serious issues concerning the public, many a times the meetings just end up serving no purpose. In the last BBMP’s term, from April 2010 to April 2015, the BBMP conducted 150 council meetings. This includes monthly council meetings, budget meetings, special meetings and mayor and standing committee election meetings. It implies on an average 30 meetings were held every year.

As the number of meetings goes up, the amount spent on providing food and water, and the conveyance paid to the councillors for attending the meetings too increases proportionately. Citizen Matters gathered data on the expenditure on account of BBMP council meetings, which revealed interesting details when analysed.

Councillor who returned the honorarium

Even as there are whispers in the BBMP corridors about a few corporators who give a miss to the meetings but promptly take sitting fee home by signing the attendance register, a corporator has done the opposite. A first time corporator, A M Hanumanthe Gowda from Herohalli ward has returned his honorarium and sitting fee to the BBMP.

Council Secretary H Chennappa said that the corporator issued a cheque of Rs 4.80 lakh to the BBMP’s Council Secretary’s office recently and it is apparently for the first time a BBMP corporator has made this gesture as far as his knowledge is concerned.

When Citizen Matters asked Hanumanthe Gowda the reason for returning the amount, he said he did not want to utilise the money at a time when BBMP was undergoing a financial crisis. “In addition, it is taxpayers’ money and I did not want to use their money for my personal benefit,” he said.

Rs 337 per person spent on food

The BBMP has spent Rs 1.60 crore to provide snacks and lunch to the corporators and officers who have attended the meetings.

According to the information Citizen Matters gathered from BBMP Council Secretary’s office, the Palike has spent on an average Rs 1.35 lakh to provide feast in every council meeting. The amount spent on providing veg meal is Rs 1.30 lakh and the expenditure incurred on the days when non-veg meal too was served is Rs 1.42 lakh.

BBMP arranges food for 400 persons in every meeting, which means on an average Rs 337 is spent on meal, tea and snacks for each person. The food expense per meeting was a little more than Rs 1 lakh in 2010 and 2011, whereas the expenditure increased in last two years.

Apart from the monthly honorarium of  Rs 7,500 given to the corporators, they were also paid conveyance allowance of Rs 1,000 every month. Sitting fee of Rs 400 was given for attending a council meeting. There is no upper limit for paying the sitting fee for council meetings. If five meetings are held in a month, they are paid Rs 2,000 as sitting fee.